WARRIORS OF ANKH by Samantha Young 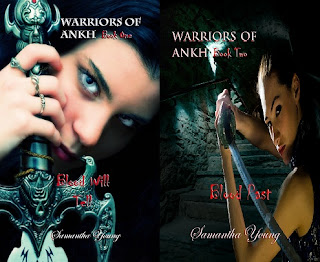 During the first dynasty of ancient Egyptian rule, the Pharaoh Djet and his sister Merneith were married young to ensure the purity and security of the throne. For Merneith, the marriage was the answer to her young heart's wishes for she loved her brother with an intensity of the gods. But Merneith's heart was to be broken when she discovered Djet's secret affair with their late father's young Queen consort, Seshmetka. In a rage of such potency it would entrap the gods in it's destruction, Merneith took revenge, a revenge that led to the goddess Bat's accidental creation of creatures of undiluted evil - Soul Eaters.
All evil needs a hunter to hunt it. The goddess, Neith, for her own dismal part in the saga of an ancient tale, created mortal warriors - the Warriors of Neith - to hunt and destroy the wicked Soul Eaters. At her sister goddess' generosity, and forgiveness for her stupidity in aiding Merneith's revenge, Bat took a Warrior of Neith and within her belly created the first child of an even more powerful, immortal race to aid in the annihilation of the Soul Eaters.
They... are the Warriors of Ankh.
Blood Will Tell (Warriors of Ankh #1)
Eden is a Soul Eater. While that hasn’t meant much to her in the past, she’s pretty sure any minute now she’s going to go all "Carrie" on her eleventh grade class.
Noah is an Ankh. As an immortal Warrior, his purpose in life is to hunt down and kill Soul Eaters.
Eden is Noah's next assignment. Problem is... this is an assignment with a difference. Eden's not your average, run-of-the-mill Soul Eater. Noah's job? To test Eden for possible redemption.
It's a risky business.
Especially if Noah awakens Eden's inner monster.
It would be kind of hard for Eden to listen to the angel on her shoulder when the devil on the other is telling her, her new best friend is a lying, scheming, immortal enemy...
...betrayal is such a bitch.
So is Eden when you get on her bad side.
Blood Past (Warriors of Ankh #2)
All Eden wants is redemption... but the road to redemption is never an easy one.

Travelling to Scotland to find her mother’s bloodline, Eden is soon embroiled in the politics and training of the Scottish Warriors of Neith. It is a world where some stand with open arms ready to welcome her as family, while others keep a wary distance, conspiring against her. Through it all Eden learns of love, friendship, and what it means to be a warrior. Her future has promise... that is until a man she thought forever gone from her life returns to threaten it all.

When the one person Eden loves above all else is endangered, she will have to make a choice. Him... or her?