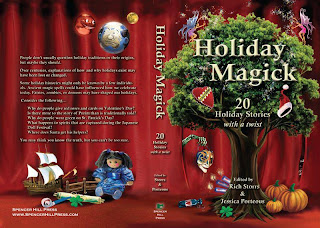 A warm welcome to guest author
Kendra L. Saunders!
Are the traits of anyone close to you apparent in your characters?
It’s funny because I think books are like dreams in a lot of ways. We draw from everything we’ve ever seen to make the characters, but we also place a glimmer of our own mind and life into each of them. In Death and Mr. Right, the two main characters were inspired by friends of mine, but the protagonist, little blue-haired Death, was very heavily influenced by me. A lot of his memories and some of his greatest comedic moments in life (usually at his expense!) were drawn from my life.
The book that I just finished writing, The Unlove Spell, draws far more on traits from people I know, though. Past bosses, friends, muses, rivals… all of them!


Who do you feel is your most unique character?


I think that Viktor Arson from the Unlove Spell is one of my most unique characters, just because he’s not as brooding and dark as many of my male leads… and he’s more traditionally masculine! Many of my characters are androgynous, but Viktor has a more traditional male role in the story. My friend Steph said something like, “he has a lightness to him” and I thought that was just beautiful and really encouraging to hear. He’s been through a lot and he has reason to be moody, but he finds happiness in his writing and in the woman he’s falling in love with. He finds things to be joyful about.


If you could have any extraordinary gift or super power what would it be and why?


This is a serious question! I would choose to be able to become someone else for a day, live their life as they do, observe how other minds work. I always wonder how other people think… surely it would be a huge step in the way of empathy if you could see another mind besides your own! You could feel bravery or fearlessness from the point of view of someone else.
But I’d also love the ability to say a certain special phrase three times or something and then fall asleep anywhere, within a few seconds. It would be so helpful on planes, busses and in unfamiliar beds! I have such difficulty with falling asleep all the time, but especially in any bed besides my own. That gets troublesome fast when you have low energy and need sleep to keep functioning!


Was there ever a moment when you wouldn’t trade what you do as an author for the world? What was that moment for you?


One time my friend was talking to a guy at a convention and mentioned my book, and the guy said he’d seen someone reading it on the subway the night before. That was one of those moments for sure! Someone compared Death and Mr. Right to Douglas Adams, which nearly made me cry with happiness. I got to meet one of my muses and mention that he’d inspired a character for me, which was awesome. And someone once asked me, after reading Inanimate Objects, if I was from England. That was such a cool moment! But there have been loads of them. I love being a writer more than anything.


Besides writing, what do you like to do in your free time?
I actually have several plates spinning at once at all times because I’m a very creative person in general, plus I work for a publishing company. I love music and fashion but can’t play any instruments and can’t do much sewing beyond basic hand-sewing and buttons and whatnot. But I’ve followed the music and fashion industry for years and, as a fan of many songwriters, bands, fashion professionals, etc, I’ve read and heard a lot of very frustrating interviews. So many interviewers ask the same questions over and over!


Somewhere along the way, I took my acting background (all those years of school plays and acting and costume design classes!) and funneled that together with my writing ability and love of the arts when I started conducting interviews. I absolutely love to interview artistic people, because I can approach them both as a fellow artist and as a fan. I ask the questions that will be informative for people looking for guidance and for people just looking to learn more about their favorite artist.
I also make jewelry, because jewelry is never big enough or sparkly enough for my taste! When I was younger, I sold jewelry until I got a ‘real job.’ And I still sell it online or sometimes to friends. Lately I’ve been doing more of that because Dolce & Gabbana, especially, has been so inspirational!
Aside from all of that, I love taking walks every day and further destroying my poor up-close-vision with reading fashion magazines. Oh, and listening to music. CONSTANTLY.


Zen in the Art of Writing by Ray Bradbury was a life-changing book for me. It’s a collection of essays and oddities that center around the life of an artist. It’s not just for writers… it’s really for all creative people. And some of it is fantastical (a monster living under the stairs? A man who knew Ray in another life?) but all of it is so rich and encouraging. The first time I read it, I cried and cried. It’s been beaten over the years, from rereads and underlining and highlighting and lending it to others. If there’s one book I could suggest universally, it’s that one.

Ray Bradbury gets it. He helps us feel a bit less… weird. That’s such an important feeling. There’s a line in the book that says, “You must stay drunk on writing so that reality cannot destroy you.” So beautiful.


When you are reading, what make a character compelling to you? Is it the same aspects that make a character you are writing compelling?
When I think of compelling characters, I think of complicated people, sometimes anti-heroes. When I read Interview with the Vampire for the rest time, I was blown away by Lestat. I’d been raised in a very conservative household and read the book on a bus every day to and from work. It felt like escaping into a magical world full of sexy, dangerous people. I admired the nuances that Anne Rice used to describe Lestat- with the detail of a lover!- but also the way he switched from sympathetic to unsympathetic, sometimes within a page. This is a guy who files his nails while his father dies beside him. This is a guy who plays piano but the music never comes FROM him.
My favorite literary characters- Henry DeTamble of the Time Traveler’s Wife, Marco from The Night Circus, Lleu from The Winter Prince, Lestat from Interview with the Vampire, Rebecca Bloomwood from Confessions of a Shopaholic, Tom from my friend Kate Edler’s Anomalous (someone please publish this book NOW)… they’re all flawed people, some much more than others. But they’re also written with an eye for detail. Marco always has ink on his fingers and walks through life wearing a magically-enhanced fake face to look more handsome. Tom has to deface a rival’s car when he notices the man has handiwipes in his backseat. Henry is feline in his movements and with his long, sleek black hair and he’s often bored and selfish.
I try to bring flaws and “killer diller details” to my characters through poetic, comedic or very specific description, and to know them as clearly as one would know their lover. 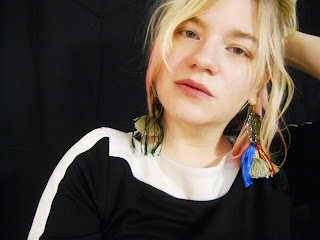 Kendra L. Saunders is the author of the magic realism novel Inanimate Objects and the dark comedy Death and Mr. Right. She has been published in Snakeskin Magazine, Premier Bride Magazine and has conducted interviews with goth rocker Aurelio Voltaire, NYT Bestselling author Jennifer L. Armentrout and fashion designers Dmitry Sholokhov and Fabio Costa, among others, for Steampunk Magazine, The New England Horror Writers and ipmnation.com. She reports regularly for Pure Textuality and writes helpful writing articles for NerdCaliber's Pages of Note.

She also has a lifelong passion for black and white photography and shares photographs from her travels and adventures through her website, facebook, tumblr and twitter.

Kendra is host of the quirky literary podcast, 13 1/2 Minutes and has been a featured guest and co-host on various radio and podcast shows.

In her spare time Kendra likes to daydream about (foreign) boys with dark hair, drink too much tea, read fashion magazines, listen to records on vinyl, plan her dream trip to England and attempt to travel back in time to the Jazz Age. Find her online at www.kendralsaunders.com or on twitter at @kendrybird


Death and Mr. Right (Spence City, 10/2013)
March 32nd, the day that doesn’t exist.
Death has been demoted and exiled to live among normals for the rest of his unnaturally long life. Everyone knows They don’t look lightly on important items getting lost or an agent falling in love.
Can the diva-like Death navigate the modern world, recover what was stolen from him (the names of the damned… ooops!) and get his job back? Or will he fall in love with Lola, the pretty thief who
got him into this in the first place?

Inanimate Objects (2012)
Inanimate Objects is a dark and glittering novel of artists and magicians, muses and immortals. At the heart of the story is Leonidas Bondi, a charismatic young artist who falls under the watchful gaze of Matilda August. Matilda has been a patron to the stars for hundreds of years, but this fickle muse is more than a little taken with her new protégé, blurring her own lines of work and obsession. Providing opposition is Matilda’s son, Elisha, a moody figure who holds revenge above all else after he suffers a terrible wrong..
Overlapping Visions (2013)
A girl helps a boy burn down his family home. A lonely woman attempts to celebrate an illegal holiday in future Russia. Young love is discovered within the aisles of a bookstore and then lost just as quickly. Two best friends arrive at the doors of a school for wayward souls. The agent of nightmares ponders mortality...

This powerful collection of short stories and poems from novelist Kendra L. Saunders is full of ghosts and emotional landscapes. In turns imaginative and blunt, Overlapping Visions leaves a lasting memory.


Thank you for stopping by
The Writers Voice!
Posted by Unknown at 12:01 AM