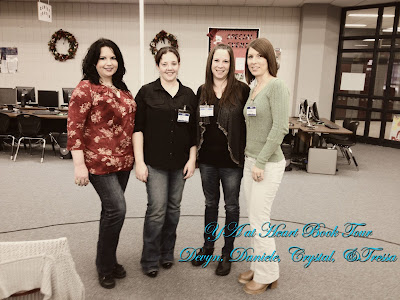 In February, I met author Daniele Lanzarotta (pictured above in black blouse next to me in red) during our YA at Heart Book Tour here in coastal North Carolina.  I love to hear her talk, her accent is beautiful.   We became instant friends and have had a lot of fun meeting fans.  On May 11, 2013 you can meet Daniele and many other authors (me too, Devyn Dawson) at the Regency Mall in Richmond Virginia.

1. What quirky thing do you catch yourself doing when writing?

I don’t know if you’d consider this a writing quirk, but I have to have music.  If the music stops, I stop.

Hmm.  This is the toughest question ever.  It would have to be something easy because I can’t cook.  How about pizza?

Yum, homemade pizza is my favorite!

3. In the movie of your writing career who will play you?

Well, it would have to be someone who can be sarcastic.  I think Rachel McAdams.

4. What do you do to celebrate when you finish writing a book?

I start another one. *Laughs*

5. Are you still against jelly beans? If so, what's your favorite color
Skittles?

Haha Yes, I’m still against jellybeans.  I do love skittles though, especially the purple ones 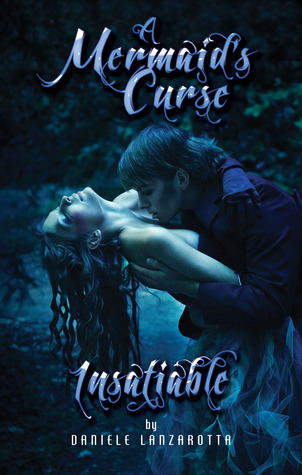 Synopsis:
Arianna always felt like she didn't belong in the world where she was born. Ever since she was little, she used to hide behind the rocks in the sea, and watch the human family who spent their summers on that island. Over the years, there was nothing she wished more than to be like them, especially so she could get close to Blake, the human boy who she saw turn into a troubled teenager and then, an unhappy man. Once her dad grew tired of her dreams and hopes for a reality that is not her own, Arianna is thrown into an arranged marriage, and her only way out of it is to make a deal with the power-hungry man who will give her everything that she has ever dreamed of. Dreams that turn into nightmares as she watches Blake's world fall apart, because of her and Blake's inability to control their desires for one another.

When I returned, my father was waiting for me and he wasn’t happy.
“Were you watching the humans again?” he asked in a cold tone.
I nodded.
He shook his head and sat down.  “I worry about you, Arianna.  You have no friends.  And then there’s Bram.  He’s a good man and he has been asking you to be his for so long.”
“Dad, I’m not a thing that should ‘belong’ to someone.”
“That’s not what I meant, Arianna.”
“Isn’t it though?  That’s how we live, Dad.  We belong to our parents until we get married and belong to someone else.  That’s not what I want.”
“That’s called tradition, Arianna.  Watching the humans for as long as you have has put ideas into your head that should never be there.  You are not human and never will be.  You are my daughter, and as the ruler of our kingdom, I’ll not allow you to be a bad example for the others.”
I stood there, speechless.   Tears sprung to my eyes.  My dad had never spoken to me as a ruler.
His tone didn’t soften one bit as he continued.  “I can’t take any chances, Arianna.  Our kingdom has questioned my ability to rule ever since your mother left.”
“But you are a good leader.  If they don’t see that—“
“Arianna, enforcing traditions is a part of being a good King.  You should’ve been married two years ago.”
“What are you saying, dad?”
“I’m saying that you’ll marry Bram tomorrow evening.”
“What?  But—There is no time to—”
My failed attempt to find excuses to avoid this wedding never stood a chance.  Father said everything would be ready and there was no changing his mind.
I turned around to leave.
“Sit down, Arianna,” he said in a firm tone.
Avoiding his gaze, I sat down.  I hoped that if I didn’t argue back, he would come to his senses.
“Lyra, Anthea, Amias!” he yelled.
The three came as fast as they could.  There was a sense of urgency to my father’s voice at that moment.  He was using his ‘ruler voice’, which he rarely did at home.
As soon as they were all in the room, father started to spill orders.  “Lyra, I need you to go find Bram and bring him to me.  Amias, escort my daughter to her room and make sure she doesn’t go anywhere.  Lyra, Arianna is getting married tomorrow evening.  Make sure everything is ready for the ceremony.”
They were all as shocked as I was.
“GO!” Father yelled.
Amias faced me, and I swam to my room with him following me.
“What did you do to make him so mad?”
I shrugged.
“You were watching the humans again, weren’t you?”
I gave him a cold look hoping that would be enough for him to leave me alone.
Amias put his hands up.  “Sorry.  None of my business, I know.”
I swam into my room, leaving Amias behind along with the ripples of water that I created as I swam past him.

©2013 Daniele Lanzarotta. May not be reprinted or reproduced in any manner, written, electronic or otherwise without express permission of author.