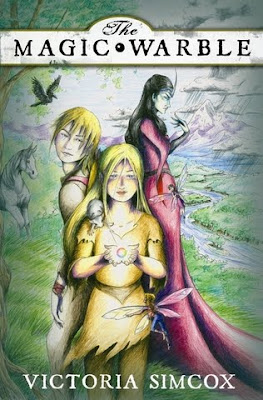 Imagine being picked on from the time you got on the school bus till the time you got off it. Or, how about not having any friends except for a pet rat and your teacher. Well, you probably wouldn’t mind missing the last day of school before the Christmas holiday break. That’s exactly how 12 year old Kristina Kingsly felt when she got up the morning before the break and looked out her bedroom window to see the billowy snow falling; she would have much rather played hooky and stayed home.

Kristina is not aware of it, but her last day of school is about to get much more exciting, and it all starts after school, when she chases after a tarnished silver ball that bounces into the laundry chute. While trying to retrieve it, she falls in the chute after it. The ball turns into the Magic Warble, and 'vuala' Kristina is transported to a magical world. The land of Bernovem has been waiting for many years for the return of the Magic Warble and Kristina is the one chosen to bring it home.

Throughout Kristina's adventurous journey, she will encounter dwarfs, gnomes, fairies, talking animals, and the wicked Queen Sentiz, who will do anything to get rid of her, and destroy the Magic Warble. Queen Sentiz has good reason to be worried about the Magic Warble's return, for if it is placed in its resting place, the spell that has allowed her to reign as sovereign queen, will be lifted.

Along her journey, Kristina meets the true prince of Bernovem, a handsome teen, named Werrien. At first their relationship gets off to a rocky start, but as the story progresses they become great friends. They journey together to the top of Mount Bernovem, and face many life threatening situations, such as, almost drowning in a raging river, being chased and captured by the queen’s soldiers—hideous creatures, known as zelbocks. They battle the zelbocks on the treacherous slopes of Mount Bernovem, and at times almost lose the Magic Warble.

Throughout her perilous journey, Kristina will not only have her strength tested but something she would never have expected … her heart will be tried and tested as well.

Victoria's exciting squeal to this story, "The Black Shard" is coming this fall, to Amazon and other major online stores.
Posted by Victoria Simcox Blog at 6:59 AM