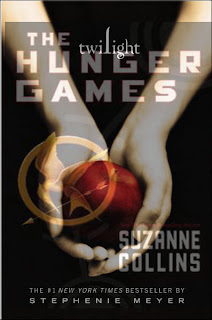 There are two dominating factions within YA Fiction at the moment.
Dystopian
And
Paranormal
Out of all the genres  (contemporary, sci-fi, romance, fantasy etc), Paranormal and Dystopian fiction are taking lead in the bestseller lists in Young Adult.  First it was Twilight and then it was The Hunger Games and now we YA fans just can’t get enough of both. Some favour one genre over the other. Not me. I’d quite happily snack on either. However, over the last year, with the exception of one amazing paranormal novel – Wildefire by Karsten Knight – I have given my highest review ratings to dystopian books. Does this mean I enjoy dystopian more or just that I feel the quality of the dystopian books I’ve read this year have been better than the paranormal fair on offer? I think I love both genres equally so... I guess that answers that question. That's not to say I haven't read some pretty exciting paranormal books this year. I have. It's just that I've read some really explosive dystopians.
Unlike me, there are those readers who do prefer one of these genres over the other.
Why?
What makes dystopian and paranormal books so popular?
And what makes a reader prefer one over the other?
OK so there are three basic plots in fiction. An Idea story. A Character story. And an Event story.
Perhaps what draws a reader to dystopian and paranormal is the fact that they both utilize the same plot. Dystopian and paranormal books are unarguably EVENT stories. So what is an event story? An event story follows a particular pattern. Somehow something happens to put the world out of order - an evil warlord, a mysterious epic disease, rebel uprising, a paranormal war that threatens the mortal world etc - and the story is about the struggle to undo what was done either by making things the way they were or by establishing a new, better order. The main character will usually be the one struggling to do this and the story should follow to that conclusion. There are a few paranormal novels out there that are Idea and Character plot-based but for the most part in YA fiction we're talking epic chaos. And I'd be hard pushed to discover any dystopian novels that aren't primarily an Event story because a dystopian is pretty much a 'walking' definition of that plot.
So have I just answered both my questions? Are YA readers drawn to Event stories over and above the other two plots? If so, is this why some prefer paranormal over dystopian, because you’re more likely to find a character-based plot in this genre? Or is the idea of dystopia just too unsettling and frustrating for some readers? Because, unlike supernatural fiction, dystopian is actually speculative – it is taking our world and speculating on what we as a society could possibly do to mess it up in the future or in an alternate reality, through technology, social structure, greed, a post-apocalyptic rebuild etc.
Truthfully, I can’t answer this question because I love both genres. A future challenge of mine as a writer is to actually try and conquer Dystopia. It’s not something I would think about at present. Why? Well, writing is all about research. If you want your novel to come off realistic then you have to crack open the research books. For me this has been pretty easy because all of my mythologies and supernatural history is based on my research of actual legends, myths and real history. I have a degree in ancient and medieval history so this is not a problem for me, I know how to troll through the research and pull out what I need. But, like Science-Fiction, Dystopian books have to have a base in reality. Whatever premise you’re using – technology gone awry, a virus, a natural disaster and the post-apocalyptic rebuild, a government rebuild, a drug that removes whatever physicality within us that makes us love – a writer has to do the relevant research to make sure their world-building is logical and authentic.  That’s not the kind of research I’m used to and it’s pretty extensive so I’d really have to have a great idea (and a refreshingly original one) to take that step forward to begin asking the right people (the experts) the right questions.
Anyhoo... if I can’t answer the question, can you guys? Are you a dystopian or a paranormal Fan? Are you both? Which genre would you prefer to read or write? And most importantly... Why?
Here’s a look at my favourite picks in both genres...
PARANORMAL 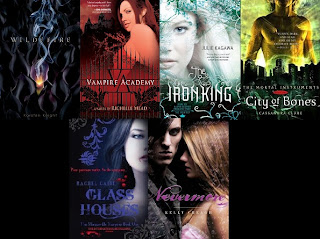 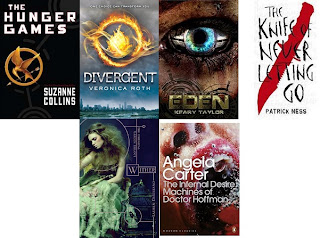 Posted by Samantha Young at 4:00 AM