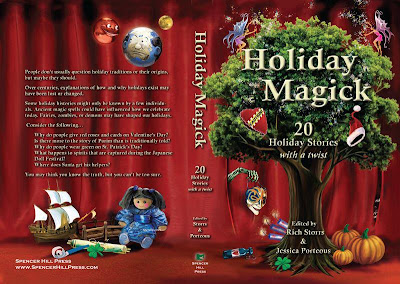 Welcome Trisha Wooldridge!
Are the traits of anyone close to you apparent in your characters?


Just about everyone close to me--as well as some people I may not be that close to--end up with pieces of them in my characters. People, in general, are interesting, and there is a bit of my brain that is always recording and analyzing in almost every situation.

I'd love to communicate with animals: understand them better, get them to understand me better. I've given that power to a few characters, and then I throw in a lot of fey creatures who can speak with humans. Granted, I do a lot of anthropomorphizing of animals--even the ones outside of fiction--and that can get you into trouble. But, at least in fiction, if you make your animals fey, you can get away with that and imagine some of the interesting differences in communication between cats and humans and horses and humans. I can only imagine how crazy animals think the human species is! (And then I write fantasy to further explore such musings.)

One of the most powerful messages in novels I read are from Madeleine L'Engle's Wrinkle in Time series--and that message would be that there exists a harmony and melody between family/community/individual, faith/science/magic that creates one massive Song of the Universe. As humans, we simply cannot comprehend the extent of it all--but that is okay. It still exists, and we are still part of it, and everything--everything--can in fact be true all at once. Our actions and intents as small as they are in comparison to the whole Song, still are an important part.
I hope I can come close to that through Heather's adventures.

What do you feel is your biggest writerly fault and how do you deal with it?

Time management: it's my biggest fault in general. I make lists, and I keep trying to better organize my time. And then Something Big happens in Real Life, and it all falls apart, and then I have to pick myself back up, nurse my wounds, climb back into that saddle, and try again. And again. And again.

What is your biggest pet peeve in fiction writing?

Lack of research. Especially from new authors. We live in this awesome world with libraries, the Internet, and an interconnectivity with other people--doctors, police, military, etc.--that authors even ten or fifteen years ago simply did not have access to. We can stream episodes of Mythbusters, we can look up how much blood should spurt from a decapitation, we can read versions upon versions of various mythology and history; there's no excuse for the extent of misinformation authors put into their books.

Research, research, research!! If you want people to believe the things you make up, you simply must get the researchable parts of the world correctly. Readers are willing to suspend disbelief for flying equines, magic/magick, faster-than-light travel…so long as the machinery, the physics, and the parts of reality that they know are correct. Next, after research, make sure the laws of your own technology and magic are consistent throughout your world. There's always a cost for power, there's always a reaction for an action--and they must be equivalent.

Amazon | Barnes & Noble | The Book Depository
Stop by Trisha's website to
find out more about her novels!
http://www.anovelfriend.com/

Thank you for stopping by
The Writers Voice
﻿
Posted by Unknown at 12:01 AM