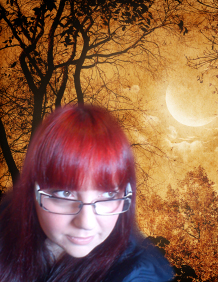 Hi folks! I'm so excited to be a part of The Writer's Voice and blogging alongside these awesome voices. Thanks for having me guys! :-)

Sooo... a little about me. I'm twenty five and I was born and raised in Stirlingshire in Scotland. As a result I'm well-armed against wet weather, sarcasm, and food that shouldn't be allowed to be called food. My immediate family is pretty small, just my parents and my big brother, but I have an amazingly supportive aunt (hey C!) and I like to think of my close friends as my extended family. Recently my wonderful readers have joined the ranks of the extended family, blowing me away wth their support and encouragement. I'm humbled by them every day.

As for writing...I've been writing since forever, well ever since C.S. Lewis convinced me that there exists a magical wardrobe that transports you to the land of Narnia (still convinced that the damn thing is out there somewhere).  From that moment on I knew I wanted to write about magical people and worlds that convey a reader into a fantastical realm of pure escapism. I’ve been scribbling down stories for as long as I can remember but I never really finished one of them until the Lunarmorte universe opened up before me during a classical literature lecture at Edinburgh University in 2006. I was so excited by the prospect of taking Greek mythology and moulding it to fit modern supernatural lore that I immediately began plans for a series. The writing of the first book began in 2008 and after many re-writes I finally self-published the Tale of Lunarmorte trilogy in 2011. The accomplishment of completing a novel has become addictive and I’m always so impatient to share my stories. Since the release of the Tale of Lunarmorte trilogy, I have self-pubbed other works I had written, including a novella titled Drip Drop Teardrop, a fantasy novel Slumber (Chronicles of the Fade#1) and the first and second in a new series Blood Will Tell (Warriors of Ankh#1) and Blood Past (Warriors of Ankh #2). There is another instalment in the works scheduled for release at the end of this year, as well as a spin-off series to the Tale of Lunarmorte titled Lunarmorte Repercussions, scheduled for release in 2012. For now I'm excited about my upcoming release Smokeless Fire (Fire Spirits #1) a series about Jinn. I have an awesome blog tour scheduled for its release in mid October where you can learn more about book one, reviews etc, plus enter amazing giveaways. You can check out more about Smokeless Fire and the tour at http://firespiritsnovels.blogspot.com/.

All and all as a full-time YA Paranormal and Fantasy indie author my brain never lets up and it’s usually stuck in weird and wonderful worlds, so conversation with me can be pretty funny… and perhaps just a little strange.

Sam x
Posted by Samantha Young at 6:00 AM