TALE OF LUNARMORTE by Samantha Young

Enter a world of Fierce wolves, stunning magic and romance… 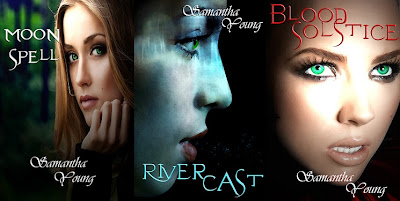 Existing in the shadows of our world are supernatural races; children blessed by the ancient Greek gods with unimaginable gifts and at present they are fighting a 2000 year old war with one another.
Into this war Caia Ribeiro is born…
Moon Spell (Tale of Lunarmorte #1)
Seventeen year old Caia Ribeiro knows she is different from the other wolves in her pack. She hadn’t known how different until her return to them after a ten year separation, finding cobwebbed secrets clinging to every corner of her new life.
There is one person who has all the answers. Lucien. Their young pack Alpha and someone who is slowly turning Caia’s world upside down. But when the truth comes out it may be too dark and life-changing for Caia to ever forgive Lucien for his silence…

…While the Alpha begins his campaign to win Caia back, a more sinister supernatural is bent on continuing his own life-long campaign to destroy the pack and the girl they protect.

River Cast (Tale of Lunarmorte #2)
Swept into the world of the Daylight Coven, Caia is caught between her loyalty to the Daylights and her new insight into the hearts of the Midnights. As more obstacles are thrown in her and Lucien's way, Caia finds herself further adrift from him and Pack Errante. With no one to turn to, Caia has to make the most difficult choice of all...
Which Coven does she truly belong with?

Blood Solstice (Tale of Lunarmorte #3)
In the final instalment of the Tale of Lunarmorte, Caia is caught between the most powerful beings in her world, desperate to use her for their own means. Struggling to find her purpose, Caia's time runs out when tragedy strikes close to home. Now she must decide if she will join the extremists she was trying to destroy... or bring them all down on her own terms...

Reviews
"I absolutely love the wolves in the Lunarmorte series. This is one group of wolves I'd love to spend the day with and it wasn't hard to fall in love with them or their family dynamics." KatieB at Mundie Moms
"If you like lykans, vampires, Greek mythology and witches, then you MUST read this book. I can’t wait to read the next book in the series “River Cast.” " Ana at Once upon a Twilight

"Moon Spell is an intoxicating and utterly entertaining story that is brilliantly written." Rachel at Fiktshun


“I can sum up this entire book in just one word WOW! Samantha has done it again, after the first book you wonder how is anyone supposed to top that? But she does it beautifully… I highly recommend that everyone who has not already done so READ THIS SERIES!” Sandra at Remarkable Reads on River Cast

Posted by Samantha Young at 8:00 AM