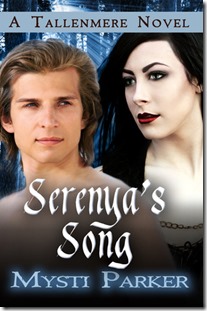 It would have to be Serenya Barnaby-Crowe, who’s half-elf, half-something else. Nailing down EXACTLY what she was and how she would evolve was had, but very rewarding. I’d never created a character as complex as she was before, and I’m SO glad I did. She really had to fight against many external and internal conflicts to maintain the purity of her heart and soul. She didn’t always succeed, but you can tell that she tried as hard as she could.

I wish I could interpret MY dreams like Serenya interprets other people’s, but I suppose, like her, I’m cursed. She actually NEVER dreamt, and I just have crazy dreams that I can’t figure out at all. But, like Serenya, I CAN interpret dreams of others (I think) to a certain extent. It’s weird, but when someone describes a dream to me, I can sort it out most of the time in my head. Mine…no way. I’ve actually devoted a new blog page for my nutsy dreams… http://mystiparker.blogspot.com/p/i-had-strangest-dream-last-night.html

I want first and foremost, for them to be moved by a fantastic love story that defies all odds. Beyond that, I want them to see that imperfect people can and DO make mistakes and that those mistakes have REAL consequences. But, I also want them to see that no character is beyond redemption. Even some of the worst characters have a chance to redeem themselves, as you’ll see in Serenya’s Song.

What is your biggest pet peeve in fiction writing?

I read a lot of indie authors’ works, and I guess it would have to be the sense that they really rushed their book onto the market without getting it critiqued and edited well before submitting. Definitely, the majority of indie authors I’ve read have presented VERY professional work that is on par with any traditionally published book, but there are always those few that put something out there without anyone looking at it first. You really DO need other pairs of eyes to point out things you can miss. As an author, you’re too close to the story to catch every flaw.

Be courageous and creative, but be consistent and realistic. Think about seasons and terrain. A fantasy novel with everyone traveling on horseback isn’t going to work if it takes only a day or two for them to head from one land to another. It could take weeks or months depending on location. Sketch out maps, take notes. Readers are savvy and will pick up on inconsistencies!

Tell us something about your book that we wouldn’t know just by reading the blurb.

There is more to Sebastian Crowe, Earl of Summerwind, than just a big, mean brute. I’m happy with how I ended up characterizing him. It took a few tries, but I think I got him just right.

What is the hardest emotion for you to convey?

Since I’m SO non-confrontational, anger and aggressiveness are hard. I have to really dig deep to let all the suppressed conflict out. I’m lucky to have critique partners that can point out when a scene is flat from lack of emotion. They’ve helped me kick things up a few notches countless times!

On a weekend night, I love to put the kids to bed and settle down with some nice red wine and dark chocolate…while playing Skyrim! I’m a gamer from way back.

I have to care about them. They need to be complex, imperfect, and motivated beyond simple self-gratification. It’s completely the same for the characters I write. If they APPEAR shallower at first, they have to evolve to prove they’re deeper than that. I’m a totally character-driven reader and writer. The characters WILL make or break a story for me, no matter the plot. It’s all in the way they handle the situations they’re in. And, as they say, that’s all she wrote!

Thank you for stopping by