The Rules of You and Me Sneak Peek

Like Raine, I just had a cover for an upcoming release revealed to the world. And so today I'm sharing an excerpt from The Rules of You and Me, a contemporary YA which is also a standalone companion book to The Boyfriend Thief. 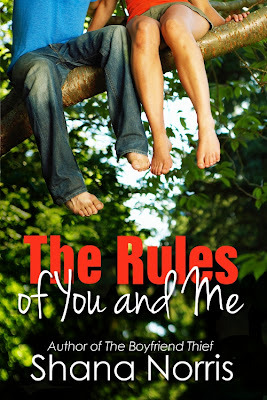 Hannah Cohen has always lived her life by a set of carefully constructed rules to maintain the image of perfection. But now, the rules aren’t helping control the chaos that is quickly taking over.
Opting out of spending the summer in Paris with her mom, Hannah instead heads to the mountains of North Carolina to stay with her aunt. The Blue Ridge Mountains provide a barrier between Hannah and the rest of the world, a safe haven where her secrets can be forgotten.
When Hannah crosses paths with Jude Westmore, a guy who hangs a different shirt from the tree in his front yard every day, she finds herself breaking out of the comfort of her rules and doing things she had never dared before. As the summer passes, Hannah and Jude grow closer and make up their own rules for dealing with life.
But when the secret Hannah has tried to forget is finally revealed, even the new rules can’t save her from possibly losing everything–including Jude.
Coming June 24, 2013 in ebook format.
Add it to your Goodreads to read list!

Excerpted from The Rules of You and Me:

Jude stuck the rag into his back pocket and walked across the dry grass toward me. I pressed the button to roll down the window. I felt even more light-headed as he neared me. It took everything in me not to focus on the lines of his abs.

“What are you doing?” he asked.

I gestured at my steering wheel. “Just out for a drive.”

“Doesn’t that require actually driving and not parking?”

“I stopped for a minute.”

Jude didn’t look at the tree, but kept his eyes on me. “You keep showing up everywhere,” he said. “If I didn’t know better, I might think you were stalking me.”

I snorted. “I have better things to do with my time. Now, if you’ll excuse me, I have a city to explore.”

Jude didn’t lift his hands from the doorframe. “Where are you going?”

“I don’t know,” I said. “I’m sure I’ll find something to look at. You guys have lots of tourist traps here, right? Maybe I’ll go get lost at Biltmore.”

“You ever been to Biltmore?” he asked.

“I’ve never been to Asheville before,” I told him. “This isn’t exactly at the top of my family’s vacation destinations.”

“If you don’t know where you’re going, you might end up lost in the mountains,” he said. “Some of the country is a little more rugged than others.”

“Well, I don’t exactly have a tour guide on hand.”

He shrugged. “Maybe I could do it.”

I narrowed my eyes at him. “You want to go tour around Asheville with me?”

“Are you inviting me?”

But it was what Mark would say that made up my mind: Do whatever you think you wouldn’t do.

“You need to change if you’re going with me,” I said, wrinkling my nose at his greasy jeans. “I don’t want oil all over my seat. And put on a shirt.” Before I go crazy trying not to look at you, I added silently.

I expected Jude to back out and tell me to go on without him. But he nodded and then turned back toward the house. I sat in my car, tapping the steering wheel as I waited. What was I doing? Was he really going to tour Asheville with me?

Just when I was thinking that it was all a joke and I should drive off, the door opened again and Jude emerged, this time wearing nice dark jeans and a clean white T-shirt. He had brushed his hair and pulled it back into a neat ponytail.

I raised an eyebrow.

“What?” he asked once he was settled into the passenger seat.

“We’re really going to do this?” I asked. “Go to Biltmore Estate. Together.”

Jude shrugged. “I don’t have anything else to do.”

“Weren’t you working on your truck?”

Still, I didn’t put the car into drive.

He opened the door just a crack, his eyes locked on me. “Do you want me to go?”

He shook his head and opened the door wider. “That’s not an answer.” He put one brown booted foot outside on the asphalt.

Jude settled back into the seat and shut the door. “If you wanted me to go, all you had to do was say so.”

I scowled at him as I shifted the gear into drive. “Do you love being difficult?” I asked.