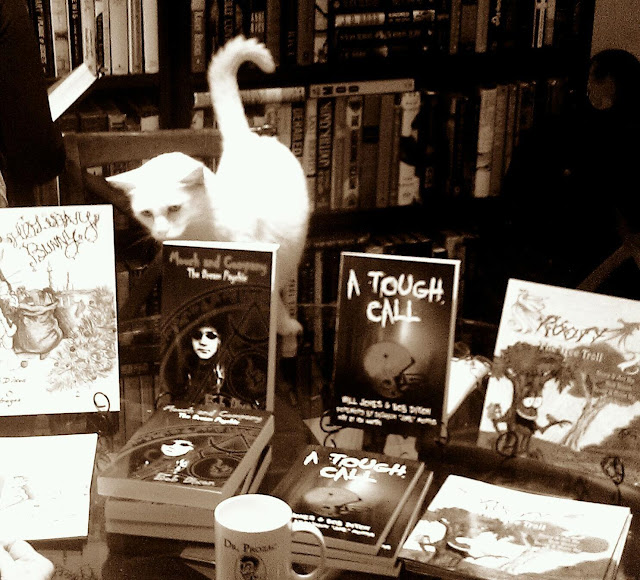 Through Indie Bookfest on August 3, 2013, I’ve had the opportunity to cyber-meet new-to-me authors.  Bob Dixon is one of those authors, and he’s very fascinating.  I’m planning on highlighting various authors from the convention here, and on my own blog -  http://devyn-dawson.blogspot.com/

1. You’re going to be attending Indie Bookfest on August 3, in Bueno Vista, Florida, how did you hear about the convention?
I heard about the event trough Facebook, I try to network quite a bit through social media it’s a wonderful way to meet other authors as well as fans

2. Your books Holiday Bunny and Rooty the Tree Troll, are really cute, what inspired you to start with Children’s Books?
I’ve always been one of those people who would say “I want to do this” and then I do it. I thought children books would be fun to do so I settled down and did a few, at the time my kids were younger so it also gave them something to read that I did

3. Mouch and Company caught my attention when I read the synopsis. I’m totally adding it to my TBR list. It sounds like something my son would like to read. Many agents are looking for teen books for boys; what was your inspiration for the book?
Like most writers I know My mind has more ideas for stories and characters then I will ever be able to tell. I wake up with ideas for stories that I want to work on one day that being said Mouch is actually based off of a comic book I did, now granted I changed many aspects of it to make it more marketable initially Mouch was not human and was a pacifist assassin.

4. I’m not going to lie, I have no idea what goes on with writing a movie. Tell me about your recent project, is it Dr. Prozak’s Office?
Dr. Prozak’s Office is a comedy about a radio DJ that talks to callers and hands out anti-advice. Originally I used the character in a local art magazine down here in the Tampa area after the magazine went under I started putting the good Dr. on myspace and then one day while watching a play I got the idea to do a movie with him. Like any kind of writing a movie is not so much hard as it is just keeping focused on finishing the story you want to tell and making sure it is a certain length to cover the time you need or want covered

5. In an amusement park you gravitate to the roller coasters or bumper cars?
At my age with a bad back..the bench lol but when I was younger it would depend a good roller coaster was hard to beat but always fun to knock the daylights out of your friends on the bumper cars

6. You have a bag of jelly beans, what’s your favorite flavor?
Do they have steak flavor?

7. There’s quite a bit of reference to coffee on your Facebook page, what kind do you drink? Are you a regular at your local Starbucks?
Im just an old fashion coffee with sugar and cream type of guy. Don’t actually care for Starbucks and actually made a reference to how flavor coffee’s are just wrong in my Dr. Prozak movie. My wife loves flavored coffees I have just never seen much thrill in them, when you get down to it im a pretty simple guy

8. What’s your guilty pleasure?
Hiking and camping, once a year me and one of my best friends go on a hiking and camping trip and its really relaxing and peaceful. Its something we look forward to all year

9. What author has influenced your writing style?
In my early career I was influenced strongly by different comic book writers since that’s the genre I initially broke into the business son. Jim Starlin, Stan Lee and Roy Thomas to name a few as I have branched out into children books ,novels and screen plays I do a lot of reading and I have authors who I enjoy a lot. I love Stephen King but only his non-horror stuff (just not a horror fan) I actually enjoy Suzanne Collins but prefer her Gregor series to the Hunger Games, I didn’t care for the 3rd installment of HG and the first 2 I couldn’t put down. The Gregor series got better as it went and the first one was pretty good, just my opinion tho

10. What can everyone expect from you over the next year?
I have a movie that is set to start filming in Atlanta in June, I have several books in the editing stages so hopefully some of those will be out soon and I have 2 more movie scripts I’m working on

Best places to stalk me at