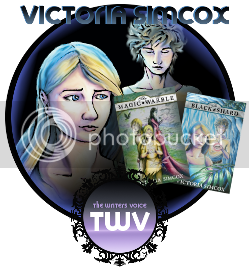 1) What inspired you to write The Magic Warble?

I remember I was sitting in the movie theater watching the first Harry Potter movie when I envisioned my main character Kristina walking down a snowy sidewalk. At the time that was all of story I had. I went home that night and wrote my first page not knowing where the story would go.

2) How long did it take you to write The Magic Warble?

It actually took me longer than I would have liked. I'd say 4 years. But that was because I was so focused on home-schooling my 3 kids, teaching art, and doing many other things. I didn't have the time I would have liked to put into my writing. Now that my two older kids are in college, I am able to write more frequently.

3) What are some of your favorite books from childhood? Were there any specific authors who inspired you?

C.S Lewis's The Chronicles of Narnia were my favorite books as a kid. I used to read them to my mom when she cooked dinner; it's one of my fondest childhood memories. I also love J.K Rowling's Harry Potter series, even though I was older than a child when I read them. I love all kinds of Juvenile fiction.

4) Where did you come up with the characters Kristina and Prince Werrien?

Kristina is my daughter's name, but even though I named the main character after my daughter, Kristina in The Magic Warble is definitely her own person. As for Prince Werrien, a little inner voice called out to me, "Name him Prince Werrien." Na, that wasn't how it happened. I just made it up.

5) If you could befriend a character from any of your books, who would you befriend? Why?

I'll go with Looper—the fairy.  First of all, how cool would it be to have a fairy friend? And second, he's cute, encouraging and always willing to help.

6) Where do you like to write? Do you listen to music while you are writing?

Most of the time I write at my computer, which is in my bedroom. I write whenever I can, morning, afternoon, night. If I'm on the road, I take my lap-top, and if I have time to kill, I'll write anywhere. I like it quiet when I write, but I have written with music on, as well as the television blaring in the background. I have to do what it takes. If I waited for a perfect, peaceful setting to write than I probably wouldn't get much writing in. Also, if I waited for a certain mood to be in than I probably wouldn't write much either. The way I write is more of a discipline; though once I get started, my creativity just starts a flowin'.