Sneak Peek at FOR EVERLY by Raine Thomas!

With the book cover for my upcoming New Adult Contemporary Romance, For Everly, officially revealed, I thought I'd take this opportunity to share a previously unreleased teaser from the book. I hope you'll share your thoughts about it and add the book to your To-Read list on Goodreads. First, here's the blurb to whet your reader's appetite:

When an act of betrayal brings the truths they both fear to light, Cole will have to fight for the first time in his life...not just for his career, but for Everly's love. 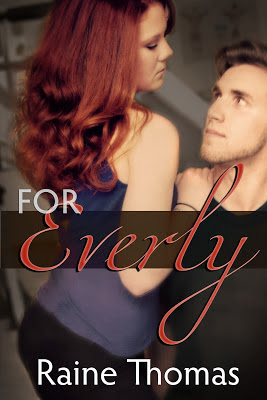 EXCERPT:
Thirty minutes later, she finally arrived at the restaurant. Between traffic and the unfamiliar area of town, it took her longer than she expected to get there. She thought she had given herself extra time, but she was still five minutes late. When she pulled up, she found herself at a valet stand. Rolling down her window, she flagged the valet who eyed her car as though it had just broken down at his feet. He approached with notable reluctance.

Waving at the twenty-dollar valet fee posted on a nearby folding sign, she asked, “Is there self-parking?”

She swallowed and nodded, getting out of her car so he could park it. She only had twenty dollars in cash, and she had intended to pay for her lunch with it. She knew the bank account was low until she got paid again on Friday, but she’d have to risk debiting her meal. Why hadn’t she thought to set some parameters when Cole suggested the restaurant?

Her headache ballooned as she hurried through the front door of the restaurant and looked around without spotting Cole. Frowning, she approached the maître d.

“Miss Wallace?” he greeted her.

“Welcome. Mr. Parker is waiting at your table. It would be my pleasure to escort you there. May I take your coat?”

Damn. She probably couldn’t even afford the free bread at this place.

Giving the maître d a wan smile, she shrugged out of her coat, putting her gloves in the pockets and wrapping her scarf around one of her purse straps. She was sure she was imagining it, but she swore the maître d held her Target-brand garment a few inches away from his body as he turned to hand it off to whoever guarded the coat room.

Shifting uncomfortably when he gave her a quick once-over and lingered disapprovingly on her jeans, she took a deep breath and followed him into the dining room. There wasn’t anything she could do about how she was dressed, was there?

Lord, what a hot mess this was.

As she spotted Cole across the dining room at a table with a beautiful view of the outside terrace, another thought occurred to her. How should she greet him? Should she shake his hand since this was a business meeting? Go in for the awkward hug since she was good friends with his brother?

Bow because he looked like a god in his simple black V-neck sweater and gray pants?

She caught his gaze when she was still about ten feet from the table. A variety of expressions crossed his features, so many that she couldn’t read them all. She definitely caught irritation, though, and was puzzled when he ended up smiling.

He stood up. The maître d deposited her with a slight bow, so she ruled out that form of greeting. Then it was just her and Cole.

“Hello, Everly,” he said, his voice as smooth as a buttered biscuit.

Had that been her voice that came out all breathy? She prayed it hadn’t sounded as ridiculous as she thought.

She started to lift her right hand for a shake, then realized he was tilting in for the awkward hug. To avoid hitting him in the crotch, she adjusted her trajectory. He smoothly used his left hand to continue her forward motion so that her hand ended up encircling his neck.

Then before she knew what was happening, her lips were pressed against his.

So...there you have it! I'd love to know what you think in the comments. Happy reading!
Posted by Raine Thomas at 4:00 AM