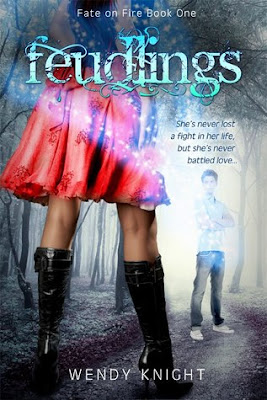 Facebook | Blog | GoodReads | Amazon | Twitter
Welcome Wendy Knight!
Are the traits of anyone close to you apparent in your characters?
Yes! Actually, Hunter is based very closely on my husband. He never talks, and when he does it’s usually a growl, but he’s fiercely loyal and also adorable.
If you could have any extraordinary gift or super power what would it be and why?
I watch Wild Kratts on PBS all the time, and they get to channel all these different animals and use their powers. I want that! Animals are so cool and they basically have every super power any Avenger has. Except maybe the shooting fire thing…
Was there ever a moment when you wouldn’t trade what you do as an author for the world? What was that moment for you?
The day Feudlings was released. I was soooo nervous that I didn’t sleep the night before. My publisher let me know it was live at midnight, and I was up playing on Facebook and shared it as my status. Immediately, so many of my friends and family shared the link and posted pictures, and it continued throughout the whole day. I knew I had amazing friends and family before that, but their outpouring of love and support that day just blew me away. I wouldn’t trade it for anything!
What do you feel is your biggest writerly fault and how do you deal with it?
I am a HUGE procrastinator! If I have a hard scene or I know I have to kill someone off that I love, I will put that thing off for as long as humanly possible. And I am really good at procrastinating. It’s one of my talents.
What’s your favorite way to procrastinate?
Facebook and Pinterest, although I can totally say that I’m using Pinterest for research, so it’s sort of a legitimate form of procrastination! Facebook…not so much.
Where do you do your best writing? Do you like to have certain surroundings?
Anywhere that my children are not. Don’t get me wrong, I love my kids, but they are the most adorable, effective distractions ever. And they are loud. Like, screaming monkeys couldn’t compete with them.
Tell us something about your book that we wouldn’t know just by reading the blurb.
It’s a love story, but it’s more action than romance, and it’s more about friendship than soul mates.
More about Feudlings
Nothing makes a new school suck worse than discovering the guy you’re in love with is your prophesied nemesis.

Ari is the most powerful flame-throwing sorceress ever, and her people’s last hope in an ancient war. But she’s also a seventeen-year-old girl, and in her free, not-hunting-nemesis times, she jumps from school to school, trying to figure out regular people her own age and pretending she’ll get the chance to graduate.

Shane lives a double life. He goes to school and masters the art of popularity, hiding the fact that he has a fate with a slim chance of his survival. He’s destined to end a 300 year-old war by killing or being killed. He knows he’s hunted by a powerful enemy who’s not afraid to die. Only problem? He has no idea who that enemy is.

When Ari shows up at Shane’s school, angry and sullen and determined to keep him at arm’s reach, neither of them realize they are supposed to be killing each other, not fall-ing in love. Until Ari does realize it, and she almost dies – by Shane’s hand.
Thank you for stopping by
The Writers Voice
Posted by Unknown at 12:01 AM