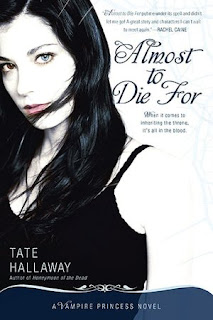 Hey all you reader and writers! Emma Michaels here to introduce our guest author of the day:
Tate Hallaway!
Hello Tate and welcome to The Writers Voice!
Who do you feel is your most relatable character to readers?
I suspect it would depend on the reader, but I’m fond of the main character in the Vampire Princess of St. Paul series, Ana Parker. She’s half-vampire, half-Witch in a world where witches and vampires are mortal enemies. People have told me that her situation resonates with teens being pulled in opposite directions by divorced (or even just ambitious) parents, because her father very much wants her to choose the life of a vampire, while her mother is adamant that she become a witch. That was sort of unintended, however, since I wrote her thinking about my experiences with second and third generation immigrants when I worked at the University of Minnesota’s Immigration History Research Center.
I think I relate most to William from the Garnet Lacey series. He’s kind of a doofus and can’t seem to decide which type of New Age spirituality he’s most attracted to.
Are the traits of anyone close to you apparent in your characters?
I always put a little bit of myself into every character I write, even the boys. My friends and family always try to find themselves in my work, and, I would be lying if I said they weren’t there in some fashion. But, I combine and extrapolate more than outright “copy,” if you will. No one appears as they are. There are, however, bits of people I’ve known (or think I know) scattered throughout.
Who do you feel is your most unique character?
That’s a doozy of a question. I’m not sure. My impulse is to say that my vampire, Sebastian von Traum, from the Garnet Lacey series might be unique in as much as he’s a vampire that was created by science, albeit the magical science of alchemy, rather than magic or through the bite of a Sire/Mistress/What-have-you. Tragically, he can’t create other vampires (though he did try), but he can sire children. He’s got some interesting back story thanks to that problem, including a son named Matyas who ages unnaturally slowly.
I’ve actually always thought Matyas was pretty unique as well. He has a very compelling love/hate relationship with his father.
What are your favorite song lyrics?
Mike and the Mechanics’s “Silent Running.”
“Believe in me, I’m with the High Command…” gets me every time. It’s an awesome science fiction song from the 80s. It probably makes me a complete dork that I love this song, but there it is.
Do you have a playlist for each of your novels? If not, can you think
of a few relevant songs?
Argh. I may be the only writer that can’t write to music. Most of the time, I write to near silence. If I have music going, I tend to set my .mp3 player to repeat and I listen to the same song over and over and over. I know for a large part of the first Ana book, ALMOST TO DIE FOR, I listened to 10,000 Maniac’s version of “Soul Train.” I doubt, though, that you could read anything into that other than the fact that I’m distinctly UNcool.
My problem is that lyrics distract me. I like to sing along or listen to the story they tell, and so if I have music going that messes up my ability to tell my own story.
If you could have any extraordinary gift or super power what would it be and why?
I wish that certain parts of the Harry Potter universe were true. For instance, it would be quite wonderful to have a House Elf or the ability to perform whatever household charms Mrs. Weasley is always using to wash the dishes or make dinner. That would make life much simpler.
Having just watched Thor again last night, I could be a Norse god of thunder. That’d be all right too.
Thank you for joining us Tate!
To all our readers our there thank you for following The Writers Voice and happy reading!
Posted by Emma Michaels at 7:27 AM