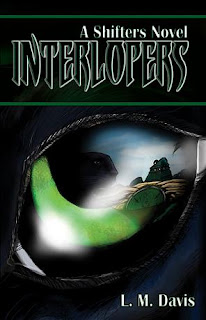 Hey all you readers and writers! Emma Michaels here to introduce our guest author of the day:
L. M. Davis
Hello L. M. and welcome to The Writers Voice!

Have you ever cut a scene out of one of your novels that you wanted to keep? Why did you do it? Can you tell us about it?

I can not think of a scene that I have had to sacrifice that I really wanted to keep. Generally, I have to add more to a novel as it goes through the various drafts, rather than take something away. If I take something out, it is mostly because it doesn't work anymore, and I am so at the mercy of my stories that I don't really fight it when I have that realization. Most of the time, though, scenes don't come out entirely. More often, those scenes get reworked so that they fit with the new version of the story.

What was the trigger for your last novel? Your aha moment that sprouted its idea?

It's hard to say. The idea for the Shifters Novel series came to me, literally, in the space of six hours. I had decided that I would wanted to write a book that my cousin would enjoy, and as I drove through Wisconsin (I was living in Minnesota at the time), Nate and Larissa just came to me as the central characters. Because, initially, this book was for my cousin, I knew that it would be a coming of age novel told mostly from the male perspective, but I also knew that I would have to have a pretty powerful female lead and that is why Nate and Larissa are fraternal twins--just about perfect equality. I also knew, immediately, that it would be a series--either that or a really long book. I decide not to inflict a 1500 page epic on the world, so a series it became. After that, the pieces just began to fall into place.

Is there one novel in your life you love to re-read? Do you continue to learn from it every time you re-read it?

Anne of Green Gables by L. M. Montgomery is probably one of my favorite novels. I love Anne as a character, with her plucky spirit and her wonderfully expressive way. I love that she was bold enough to hit Gilbert Blythe, the cutest boy in class, over the head with her slate when she felt like he was mistreating her--rather than sitting back and taking it. I am not sure that I am still learning from it in the same way that I did when I first read it as a kid, but I still get the same satisfaction of immersing myself in that world. I always laugh when Anne accidentally dies her hair green, I still shed a tear at the end when a beloved character (I won't say who) dies, and I always sigh with contentment when Gilbert and Anne finally become friends. Reading a favorite book is like visiting an old friend. It can remind you of another time and the person that you were when you first read it, and it can also be a kind of comfort now.

How do you know that your plot will hold the weight of your novel? Do you write more plots that novels then pick and choose?

When I write, I don't necessarily set out to write a novel. I write to tell a story, and I write until the story is told, whether the result is a short story, a novella, or a novel. Sometimes when I come up with an idea, I know immediately that there is so much to it that it will need a novel length number of pages to fully explore it. Other times, I think that I have a novel length idea and it turns out to only be a 30 page short story. I think that sometimes putting those length parameters on an idea at the start kind of interferes with my creative process, which can lead to wicked writer's block. So, instead, I try to let the story tell me its shape and form. I listen to the story as much as possible from the beginning to the end.

Is the way you structure your novels a choice or does it come to you organically?

The story and most of the major plot points come rather organically. In that, it is hard to make choices about structure because once I have the plot points I have to get the story to move from A to B to C to the end. Most of the time, there is not a lot of flexibility in that process. Sometimes, while revising, I find that some event or conversation that appears early in the draft would actually work better and make more sense later and vice versa. But even that is not me making a choice; instead those choices fall in line with the demands of the story rather than my personal preference.

Have you ever used or gotten ideas for dialogue from conversations you have overheard or had with others?

Frequently, the dialogue of my stories reflects the way that I speak and the ways that people around me speak; I haven't dabbled with different kinds of dialect yet. Some of the dialogue in Interlopers, while not reflecting any actual conversation that I have had, sounds like the kind of conversation that I would have if I were talking about my life as a were-panther. :-) I try only to use dialogue that sounds convincing to me as I read it. If something sounds fake or like it is a stretch, it has to go...because I think that dialogue--the words they use--are part of what makes a character believable. I don't want to have anything in my stories that stops my readers from connecting with my characters.