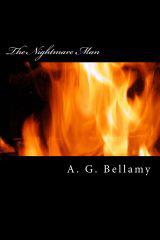 Hey all you readers and writers! Emma Michaels here to introduce our guest author of the day:
AG Bellamy
Hello AG and welcome to The Writers Voice!

“Don’t write in first person present- you haven’t got enough experience to write like that. Besides, it’s not right for the story you’re trying to tell. Save yourself some embarrassment and have the courage to ask people for their absolute honest opinion.”

Who are the writers who've inspired you the most?

JK Rowling. I grew up with Harry Potter and come from a similar background to JKR. She made wizards cool again and she’s part of the reason I use magic in The Nightmare Man. He’s not technically a writer, but I have to give some credit to my childhood imaginary friend Richard. When I was little, my father wasn’t around so my mind created a father figure for me until I was thirteen when I started to pen the stories that would eventually become The Nightmare Man; he used to tell me stories about his family, his friends and the job he had. There’s a small part of me now which is happy that his stories are out there to be read.

Was there ever a time you felt like giving up? Why didn't you?

A lot of stuff happened during college, mainly the fact that I was stupid enough to enter into scamming publishers but smart enough to get out just before anything more happened. I was also being bullied a lot. This may sound like it should have put a stop to my writing, but I needed an outlet for my depression and anxiety which almost drove me to suicide. I started thinking about Richard and the stories he used to tell me.

Who is one person in the past or present who you felt was truly visionary?

There are so many… Can I pick twenty? Since I can only pick one I guess it’d be Seth MacFarlane; I love Family Guy and American Dad and a lot of the satire in my book came about because (although he did rip off The Simpsons in many ways) I admired the jokes he writes. He’s also a trained musician, singer and gets his friends and family involved with his work. I’d like it to be this way in the event that my book becomes a film; my friends getting involved with the filming and my family being there to see it filmed and probably having cameos.

J.K. Rowling and other authors are known for the ‘Easter eggs’ they hide in their books. Do you have any Easter eggs in your stories?

Yes. I’m quite political although I don’t support a political party; there’s a scene I wrote around the time the ConDem Coalition was announced, and the way David Cameron manipulated and continues to manipulate Nick Clegg astounds me! When you get to the scene, you’ll understand what I want to do to Cameron. There is another little Easter egg, but before I tell you here’s a little back-story: in college, I had a horrible time in class because it was my classmates were the same people over and over again for every lesson. As a result, I started hating them and they started hating me, which meant that none of us were friends. Due to this, I befriended some of my teachers. Two of them I can’t technically call ‘friend’ because with one I had a semi-awkward relationship and the other was a hippy and therefore was friendly to everyone. I named two characters after them: Anna Jackson and Demitri Henshaw. Of course, I made the names slightly different to their namesakes. I’m also making one character’s personality similar to that of my Theory of Knowledge teacher – Mr. B – who was probably the best teacher-friend a girl could ask for! I absolutely loved him and would occasionally leave strawberries for him (as a sign of friendship and nothing more). He was the sweetest guy on the planet and the character I have is going to have a carbon copy of his personality. Mr. B is also the reason why there are so many references to strawberries in The Nightmare Man *nervous chuckle*

I thought I was going to be everything *laugh* I was really good at art and drama when I was in primary school, but halfway through the teachers- in addition to the students- started to bully me and I lost enthusiasm for drawing and acting. In secondary school I got into science and started hating most of the arts (the art teacher was a bitch, dance teacher bullied me, music teacher told me my fingers were too short for me to ever be a successful musician and drama teacher was racist to the white students). At that point, around 13, I started writing and intended to be a nuclear physicist/science-fiction author. But then I entered college on the IB Diploma and one of those dreams went down the drain, and I found myself getting back into art, theatre, music… and regretting the time I wasted poring over science books when I should have been practicing the guitar and piano, reciting Ibsen and tapping along to the soundtracks of Fame and The Phantom of the Opera and proving those teachers wrong! I guess it wasn’t too bad though, because I’ve come up with a scientific basis for several of my creatures.


To all our readers out there, thank you for following The Writers Voice and happy reading!
Posted by Emma Michaels at 6:50 AM