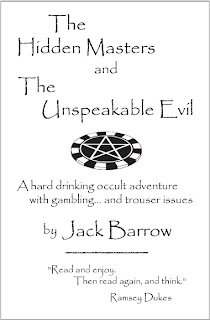 Hello all you readers and writers!
Emma Michaels here to introduce our guest author of the day
Jack Barrow
Hello Jack and welcome back to The Writers Voice!
Besides writing, what do you like to do in your free time?
I'm a huge fan of Radio 4 so it's on all the time but I can listen to that while I work. I used to watch too much TV so I got rid of it but now I watch the iPlayer. I am a bit of an enthusiast for the BBC and it's quality media so I don't mind admitting it. Otherwise I do quite a bit of camping but mostly at organised camps. Some of the camps involve music and percussion so I do a bit of drumming around the fire. I should practice percussion more at home but I really don't find the time as much as I would like to.

Tell us something about your book that we wouldn’t know just by reading the blurb.
There are three chapters that have similar plots where the characters have to do similar things three times (if an individual chapter can have a plot). In an attempt to make each chapter a bit different from the others I tried to write each one in a different genre. I don't know if it worked and I've never had any feedback so perhaps I wasn't obvious enough. There's also a chapter where someone mixes twenty six cocktails in alphabetical order but I don't know if that's been spotted either.

Is there one book that has had an impact on not only your writing, but on you personally?
I really want to answer this question but I sincerely can't think of one. I'm sure there is such a book but I can't put my finger on it. I'm sure that at some point I'll think of something really seminal but by then it'll be too late.

What is the hardest emotion for you to convey?
My characters drink quite a lot and I quite often have to portray them getting steadily intoxicated. It's not an emotion as such but portraying someone gradually losing control, forgetting things, slurring their words, having sudden outbursts of inspiration or excitement; I'm just not sure I've got that right. I was once at a boy's weekend away where we very nearly failed to make a ham sandwich because we were so out of control; not falling over drunk, just we couldn't concentrate to keep it together. I try to use real events that have happened for my fiction so I put that in the story but I'm not sure it really worked. I think I might just have confused the readers.

Tell us something most people don’t know about you!
I had an ecclesifringical upbringing. My parents were both Mormons and Jehovah's Witnesses at different times during my childhood. There is a suggestion that the experience has given me a bit of a skewed view on what some people might call spirituality and that a big part of my writing.

Which came first for you--the characters, the idea for the setting, or the plot?
The characters, undoubtedly, because they are real people. They really do get up to these things at the weekend, just they don't save the universe while they are away, well not that I'm aware of anyway.

Is there anything you’d like to go back one year and tell yourself?
Don't buy those shoelaces, they lied about how long they were!

When you were growing up, what did you want to be?
An architect, but someone told me that you had to be good at maths so I didn't pursue it. That was the case with quite a few ambitions. A careers adviser once told me that if I wanted to be a professional photographer I would have to make the tea and sweep up so I didn't pursue that either. What I later learned was that you had to make the tea at the start of any career. If I ever meet that career advisor I'll give him some advice of my own but he was really a geography teacher doing a job he wasn't trained for so I suppose I should excuse him.

Is there one piece of advice you wish someone would have given you before you started writing?
Find a good editor, friends are fine at the start but you can't beat a good editor. In fact get professional help in every way you can. Don't be afraid to spend money on services that you can't do to a professional standard. Just think how unlikely it is that you have natural talent at any one thing. How likely is it that you will have natural talent at editing, jacket design, blurb writing, marketing, web design, accounting, as well as writing? Pay professionals to do this and you will have so much more of a chance. You might even restart the economy in the process.

When you are reading, what make a character compelling to you? Is it the same aspects that make a character you are writing compelling?
Strangely, I don't read a lot of fiction. I read for research and education which means reading non fiction. I'm about to write about an end of the world cult so I'm going back to my interest in psychology that I studied for years ago so I'll be reading Festinger's When Prophecy Fails. A friend has been recommending a steampunk novel so that might be my next foray into fiction.
Thank you for stopping by
The Writers Voice!