When Your Characters Become Real People

Being a writer is weird sometimes. Well, if I'm honest it's weird most of the time. See I don't feel like i live in the real world for 90% of my day. I find myself 'actively listening' to people because I'm really thinking about what I'm going to write down as soon as I can find a piece of paper and a pen. I've gotten disgustingly good at pretending i'm in one place, when really I'm in Los Angeles or Montana or London. Recently I've been spending a lot of time in New York and a fictional tent city I've coined Freetown. And all of these places are populated with people who don't exist.

I made them all up.

That's the really weird part, because you end up feeling you know them, these imaginary friends you've created from a combination of your past experiences and fleeting encounters with people who invariably touched your life in one way or another. It's interesting to catch glimpses of other individuals in the characters of your books. You write in quirks and mannerisms sometimes from people you haven't seen in years. People you loved, or still do. People who hurt you. People who died and left the world emptier for their absence.

They're echoes of your subconscious, and i've always been fascinated by how others see the characters that I've dreamed up. They're so personal to me that I've wished many times I could see them the way others do- without the emotion and the vested energy it's taken to build them out of nothing- to see who they'd envisage.

I guess I got a good indicator of who my readers thought Daniel (the male protagonist in Sovereign Hope) would be when I challenged them to help me find the perfect guy to pose as him on the cover of the sequel. I got so many varying photos sent to me, some of which didn't look anything like the man I had described in my book. But that didn't matter. The guys they sent me were pictures of people they'd pictured in their heads when reading my book. People who maybe looked like memories from their pasts, people who had touched them and changed the way they saw the world.

Now that the challenge is over and I've found someone to be Daniel on the cover of Eternal Hope, things have become kinda confusing. Collin is a fantastic match for Daniel, but it's strange to know there's going to be a tangible person, an actual live human being out there that readers will now picture when then read the book. Or maybe they won't. I don't know, I can think of a hundred occasions where I've instantly ignored the cover of a book in favour of my own imagination.

How does this effect you guys? Are you a sucker for a pretty face on the front of a book, or do your psyches kick in and paint a pretty pictures of their own?

You can check out Collin Atkinson by watching the youtube video here! It's his birthday today, and I'm sure he would love it if you stopped by and wished him glad tidings on his facebook page. If not only for the fact that you'll be able to check out more amazing photos like this one! 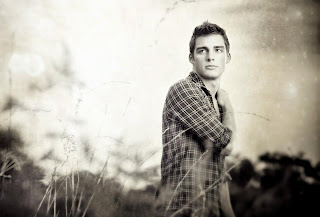