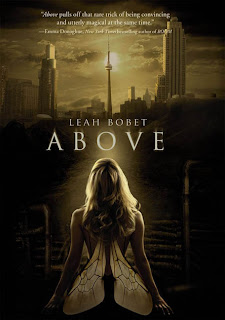 Hey all you readers and writers! Emma Michaels here to introduce our guest author of the day:
Leah Bobet
Hello Leah and welcome to The Writers Voice!

Can you tell us what scene you can remember being the hardest to write? What scene was it and why was it difficult for you?

There's a sequence in the middle of ABOVE that takes place in an abandoned psychiatric hospital: Matthew and his friends are sneaking through it, looking for both some answers and, honestly, for a fight. It took forever. No, really. It's a long chapter and all – in its first incarnation it was something like 9,000 words – but seriously, this thing took me a month. It started being Evil Asylum. And then Evil $^%&@* Asylum. I'm not honestly sure why it was such a slog, that one. Partly because I was setting this in a real place, and one I've never been into, and probably sticking too close to the reference photos instead of rushing ahead with the plot (and most of this scene, tragically enough, has ended up on the cutting room floor over three or four revisions for exactly that reason). Maybe it was because it's the turning point in the whole novel – where one goal is substituted for another –and it was really important to get right. Maybe I was just at the point in a novel, wordcount-wise, where things get a little shovy and you have to pay attention. Either way, there was a lot going on in there, and once I was out of it, the rest of the book felt as easy as pouring water. Well. Until the next draft.


How important is your writing environment when you are working on a novel? Can you write anywhere or do you need a specific setting?

Not too important, mostly because I try not to let it get too important. I don’t own a house, I rent apartments, and if I let my writing environment get too important, I'd suffer a catastrophic inability to work every time I moved. I do have a little trouble starting up in a new place, but standing behind your writerbrain with a sharp stick will fix that.

Do you have any closet/trunk novels hidden away?

Four, actually. And those are the ones that are finished, and not just pieces I abandoned for whatever reason. I'm hoping to take one or two of those and do a white-page rewrite one of these years. I might know enough about craft at this point – and know enough about the world – to make some of those ideas work. If not, they're great to scavenge for spare parts.

When you are looking for a book to read what do you look for? Has what you look for changed since your first publication?

I'm a pretty open-minded reader. I look for good characterization, for interesting structure, for themes and tropes that haven't been done to death – or really interesting commentary or twists on those things that have been done to death. I look for really lovely prose, whether it's minimalist and spare and dignified or bright and florid. There is no genre I will not try. And I think that's what's changed since my first publication: no matter what else is going on in terms of the genre or the point of view, I can appreciate any kind of book just on the craft alone. Before, I stuck pretty hard to fantasy and science fiction novels. Now, if something's well-written, I'll pick it up. And that's really broadened not only my appreciation of reading, but, I think, my own mind and worldview just as a person. Reading is an inherently empathetic experience, and when you're reading books from people who don't necessarily think like you do; who grew up with different cultures and assumptions and attitudes, you're not just learning books, you're learning the world.

How long does your first draft normally take you to write?

Hah – there is no "normally", I'm afraid! I wrote the first draft of ABOVE in a year and three months, and it was the year where I finished my university degree on a double course overload, sneaking away to write once every two weeks when I had a spare breath between assigned readings and papers to write. It was also the year I looked for a job, got a temp assignment, looked for a permanent job; where my sister got married, and most of my autumn turned into dress fittings and shower planning and dealing with relatives (between working that temp job and looking for the other one). I also, y'know, was trying to see my friends some and keep my apartment clean. Point being: I can't say what's a normal time for me to draft a novel, because so much depends on what else is going on in my life. I've written books in four months; I've written them in a year and three months. The one I'm poking at now I started a year ago, threw back into the slow cooker because it wasn't ready yet, and while I'm getting regular wordcount on it now, who knows how that might go? I don't recall whose truism it is, but someone wise has said that you never learn to write a book, you learn to write this book. And after drafting a few of them, at this point each one just takes however long it takes.

When you are writing your first draft what do you try to accomplish with your first chapter? Are you just trying to get the words out, do you consciously try to write your hook first, what is the first chapter like for you?

I'm not all that deliberate on a first draft: While it's taken me a little while to learn to revise well and trust the revision process, revising's where I do my deliberate things. My first drafts, while pretty tidy, are mostly about putting together the world, the characters, the situation, and seeing what sparks. I will usually machine the first chapter a little more than the second or third, but that's just because of how I tend to do that exploring: I'll start reading from the beginning, tinker and putter with what I already have, and then keep going forward. So after starting from the beginning a few times in order to get the second chapter out, and then maybe from halfway through the first chapter to get the third chapter out, that first chapter will look pretty polished in comparison. As for the hook: I have never deliberately set up a hook. If a concept or scenario is interesting enough to get me sitting in my desk chair writing something down, well, it's already got a hook, hasn't it? :)


Do you ever identify with one of your characters more than the others?

Not really, no. Every character I write has a slice of me, and every character I write is most definitely not me – and I don't want to write a character I'd identify with more than the others in their landscape: it would bend the narrative and the world in ways that I don't feel would make for my best work. People can tell when a writer's playing favourites, consciously or unconsciously, and they don't like it for very good narrative reasons. The world doesn't play favourites, and seeing that go on in a story undermines the realism of the work. I'm really big on building worlds that feel real and people who feel real, so that their decisions and struggles and needs are important and affecting for the reader. So for me, at least, identifying more strongly with one character than another is just not the best craft decision.