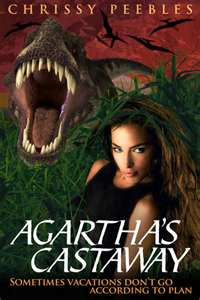 Seventeen-year-old Casey Smith can't wait to embark on her summer vacation, not least because she's finally shed her tomboy image and lost her baby fat, and now heartthrob Mike seems interested. What starts out great with lots of hot flirting taking her a step closer to winning her crush's heart soon turns into her worst nightmare.

Tossed out to sea during a freak storm, Casey is washed up on what she presumes to be a mysterious tropical island that's on no map she's ever seen. Soon she discovers that being lost is the least of her worries.

In a world that should never even exist, to save the ones she loves, Casey needs to win the war between good and evil...even if it means losing her own life in the process.

Watch the book trailer below:

My name is Chrissy Peebles and it’s so fantastic to be on your lovely blog. I work as a nurse by night and an author by day. No time for sleep, because I’m making a last minute mad scramble to make sure my kids have matching clothes, lunches, and backpacks on, and then I’m running out the door half-dressed, a pop tart in one hand, and the phone in the other. And it’s not my cell phone! Shoot. I have to go back. And the rest of my day isn’t any less hectic. The tight-rope act between balancing work, writing, and family is difficult. (but worth it) I think on a day off, I love to read a good book curled up on the couch with a cuddly blanket next to the fireplace in the winter. And when it’s summer, I go down to the beach and throw down a blanket and just read until I have to come home to get the kids off the school bus.

In September, I published my first YA novel called, Agartha’s Castaway. Writing this book has been such an amazing journey and experience. The feedback has been fantastic, and one thing I’ve learned is that many people are curious about the idea behind this novel. And I think that’s fantastic! These are two questions I’m frequently asked: “How did you come up with that? What was your inspiration?”
My inspiration came from my desire to share my overactive imagination…to entertain. And here is how it all started:

It was a hot summer day and I went to an exhibit at the zoo called, "Dinosaurs!". Eighteen of the automatons stood along a prehistoric promenade around Waterfowl Lake, moving their limbs hydraulically and bellowing through implanted speakers. Some of them were huge and lifelike, especially the T-rex. Watching the robotic reptiles was so much fun and we learned so much about the mighty lizards. My daughter looked up at me with her big brown eyes and pigtails and said, “Mommy, you should write about dinosaurs.”
I thought long and hard about that statement. I thought it’d be fun to take three normal, contemporary teenagers and throw them into a fantastic, not-so-normal situation. You know, really throw them out of their element. I thought dinosaurs could do just that. I’ve always loved dinosaurs and I didn’t think there was anything like that in the young adult genre. I could even make it more unique by throwing in a sci-fi twist and a crush. I really loved the idea of my main MC having a massive crush on one of her friends. Maybe I was even mimicking my own life. When I was a teenager, I had the biggest crush on my blond haired, blue eyed best friend. He was hot!
I pondered. What would happen if one was stranded on a deserted island with a popular dead-drop gorgeous MTV reality star? The ideas brewed in my head all day long. I really wanted to come up with something original and different. So I just started brainstorming and writing like a mad woman, and then my characters emerged: Mike’s a championship surfer, Jack’s a popular jock, and Casey is trying to find herself as she sheds her tomboy image. Idea after idea kept popping into my head and suddenly I was writing the book.
My main goals were to entertain, snag the reader’s attention, and never let go. I knew the best way to accomplish this was to write about what I loved—fantasy. Fantasy is my favorite genre to write because I've always had a vivid imagination. I love it so much because I can weave or spin any storyline I want, create my own fantasy world and characters, and let my imagination spill over. There’s nothing more fun than that!

Thanks for having me today. Please feel free to connect with me online.

My blog: http://chrissypeebles.blogspot.com/
Posted by Jayde Scott at 12:39 AM