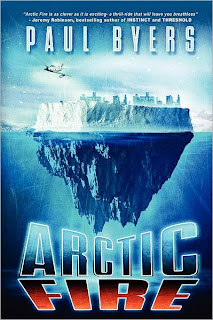 First of all, I want to thank Emma and the crew at The Writers Voice for giving me the opportunity to share a few things.

Rather than make this a technical, “How to…” post about writing, editing or marketing, this will be a little more general and laid back. So grab your cup of coffee (there’s a Star Bucks on every corner here in Washington) and prepare to go inside the mind of a madman and see how he thinks; but remember, you’ve been warned!

Probably the number one question I get asked is “where do you get all your story ideas from?” The answer to that question is as varied as the people who ask it. As a thriller writer, with my roots in sci-fi, I am always keeping my eyes and ears open for that little spark that will jump start my imagination.

An idea can come from many different places and can be used to fit many genres. I’ll give you a couple of examples. I read a newspaper article about how scientists discovered unexplained red algae underneath a melting glacier. Well the sci-fi part of my brain jumped all over that. Mars is called the red planet, so maybe the algae under the glacier was the same stuff that’s on Mars and now that it’s been freed from its ice prison, it will start to take over the planet like it did on Mars. Will it turn the earth red, coving it with a strange vegetation that will choke out everything, including us!

A simple phrase can also spark the imagination; take the term, Dream Catcher. We’ve all seen these intricately woven Native American pieces of art that are designed to work in the spirit world and keep nightmares away. But what if they were real? What if someone had unlocked their secrets and could use them to catch good dreams? He could then sell the good dreams to make people happy, but on the flip side, he could catch the bad dreams and sell them to those who wanted to terrorize their enemies.

Suppose a mad scientist (why are they always mad anyway?) discovered a way to manipulate someone’s dreams so that person couldn’t tell if they were awake or asleep? Does the movie The Matrix or Inception sound a little familiar here? Who knows, are we living in our reality or in someone else’s?

There’s a little exercise I use when I give lectures at the high school for their Creative Writing class. I hold up a picture of a spaceship that’s orbiting above the Earth. I then ask the kids what they see. It’s an exercise not to test what their eyes see, but to test what their mind sees.

Is the ship just arriving or about to leave? Who built it? Is it from an alien race here to help us or to invade us? If we built the ship, is it man’s greatest achievement, ready to explore brave new worlds and to boldly go where no man has gone before? Or is it a warship ready to conquer a neighboring planet? The possibilities are endless!
Though I primarily write action / thrillers, like I said earlier, almost any story idea can be used for different genres, take for example the idea I used above about the Dream Catcher. Yes it would make a great thriller, but how about a love story? A man is obsessed with the loss of his wife and is capturing the dreams of everyone who knew her to make a “living dream album” from them. Touching, but what if we throw in a twist, maybe the process is killing the donors. It could be turned into a paranormal / horror thriller if the bad guy uses it to bring out evil dreams or spirits and he wants to unleash them on the world for revenge for the loss of his wife.

Same thing with the spaceship example. Instead of a military or action adventure, a rich gazillionare builds the ship to go after his wife who was abducted by aliens and...poof, instant love story. If done right, and it can be done, maybe the ship is full of space vampires who are here to take over the earth and make slaves of both us and the earth vampires. (look out Bella) Maybe humans and earth vampires must make a truce to fight the space vampires; maybe a human and vampire are boyfriend-girlfriend and must make the ultimate sacrifice to stop the space suckers.

So there you have it, and as you see, ideas can come from anywhere, you just have to keep your mind open to them. I also told you the mind of a writer is a scary place. And what is even scarier is that there are a lot of us out there, writers that is, watching waiting, listening for that next great story idea. And what is the most frightening of all is that as some of you are sitting there reading this, you are feeling a knot beginning to form in the pit of your stomach (and no it’s not because of that fifth slice of pizza with the anchovies that you ate last night, shame on you) it’s the sudden and frightening realization that you might be one of us! That you finally realize that you too can do this and become a writer.
Remember, you were warned.

Paul is the author of the WWII spy thriller, Catalyst and the action adventure thriller, Arctic Fire plus he has a new compilation of short stories title, Act of God, coming out in ebook this December. All his books are available through Amazon, B&N, Nook, Kindle, Smashwords and other retailers.

To learn more about Paul and his books please visit his website at www.paulbyersonline.com

If you would like to contact Paul directly, you can at. Info.paulbyersonline@yahoo.com
Posted by Emma Michaels at 10:30 AM