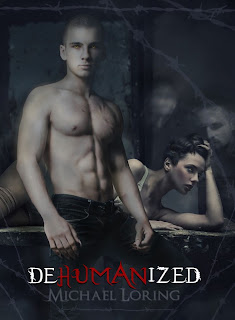 The past few months I've been working my butt off on the sequel to Dehumanized. Some of you know how this process has been going, if you follow my blog, but others of you don't. It's been hard, seeing as I want it to be as perfect as possible. I keep writing, deleting, then re-writing again because I want no room for error when it comes to this novel. Now, after all the trial-and-error I've been going through, I finally got a handle on things and as celebration I'm going to share a small excerpt exclusively here on The Writers Voice!


--
Russell must have power-walked or full-out ran, Ryan thought as he sat in the passenger seat of the pick-up truck staring out through the windshield searching for his friend. They were already trucking through the highway, merging into the hum of eighty-per-mile cars. Elizabeth sat in the driver's seat, her green eyes darting between the road ahead and the sidelines, keeping watch for Russell. Sarah and Anna were practically peaking their heads out in the back seat like dogs with their tongues sticking out, Sarah near panicking as they continued down the highway without Russell in sight.
“Where could he be?” Sarah said, frowning so deeply lines were beginning to form on her smooth forehead. “He couldn't have gotten this far,”
“Maybe we missed him?” Anna suggested. “All of these cars racing by...it isn't impossible to not see him walking.”
“No,” Ryan said, shaking his head. “We couldn't have missed him. Unless he's a ninja there's no way with all of us looking we couldn't spot him.”
“He must have taken a different route. He has to be in town.” Elizabeth said.
“So take the next exit,” Anna said, leaning forward in between the front seats. “We have to hurry. It's almost six-thirty.”
Elizabeth nodded, flipping the turn signal and pulling off towards the exit. Ryan glanced up into the sky as they drove, seeing the faded outline of the full moon hanging in the sky. The wolf gave a rumble, raising its hackles in joy at the sight of the moon. He could feel its eagerness coming in waves, their emotions connected. He gave a shiver, suppressing the rising tide of energy the wolf was sharing with him. It took everything he had to not jump and yell out to let loose some of the tension building.
It wasn't long before the buildings of the local town came into view, people meandering about the sidewalks completely unaware of whom...or what was passing them by in the red pickup. Ryan stared into each of their faces, searching for Russell, but he couldn't spot his friend anywhere. He frowned deeply, looking between the buildings at all of the people outside.
“I'm not seeing him,” Ryan said.
“Damn...where could that idiot be?” Elizabeth muttered, tapping her fingers against the steering wheel impatiently. “We've only got a little while before the moon hits its apex, and if we don't find him it spells trouble for all of us.”
“What can we do?” Anna asked. “It's not like we can ask people if they've seen him...we'd be exposing ourselves.”
“We're already cutting it by driving through town like this,” Elizabeth said, her lips pursing in thought. “Wait, I may have an idea.”
“What is it?” Sarah nearly jumped into the front seat at Elizabeth's words.
Elizabeth glanced at Sarah before returning her gaze to the road. “It's nearly the full moon; your senses are at their strongest. You can maybe follow his scent and find him.”
Ryan frowned softly at this. “What, like...hound dogs?”
Elizabeth quickly shook her head. “No! I'm just saying...it's been proven that when the moon is almost full your senses are doubled. I read a whole dissertation about it.” she said.
Ryan glanced back at Anna, who was pursing her lips in consideration. She looked back, nodding her head. He blew out a breath through his nose and turned back to the front.
“Alright,” he said in resignation. “I got this...”
Ryan cranked the window down all the way, feeling the wind brushing against his face. It felt nice, and he couldn't help closing his eyes to relish in the feeling. The wolf gave a purr, much like it did earlier in the shower, and Ryan gave a slight smile.
“You getting anything?” Sarah asked from the backseat. “Can you smell him?”
Ryan flustered in embarrassment. “Um...just hold on,” he said, closing his eyes again and sniffing the air. His nose was assaulted by a barrage of scents. He could smell the exhaust fumes coming from the cars on the street, smell the cologne of the men walking by and the perfume of the women as well. He could smell the grease of the fast food restaurant they just passed, and the trash just outside of the building to their left. He scrunched up his face, trying to discern through the millions of smells in the air to try and place the familiar scent of his friend. He furrowed his brow, trying hard to find Russell.
“Anything?” Sarah asked again.
“No,” Ryan said, scowling as he opened his eyes. “There are too many scents in the air. I can't find him.”
“Let me try,” Sarah said, crawling over the arm rest and sticking her nose in the air. Ryan turned to her, watching as she closed her eyes and sniffed the air slowly, inhaling the scents that wafted through the town. Her eyebrows knitted together slightly, seconds passing in silence as Elizabeth drove and Ryan and Anna watched Sarah. Her features etched into one of frustration, and she flung herself back into her seat with a growl.
“Nothing...” she grumbled.
“Odd...” Elizabeth said, tapping her fingers against the steering wheel more prominently. “If he came through here you should be able to catch his scent.”
Ryan sat and mulled over the situation for a few moments, when suddenly it hit him. “Wait...what if he didn't come through here?”
Elizabeth frowned, glancing at him. “What do you mean?” she asked.
“What if he didn't come to town?” Ryan said. “What if he is still on the highway or something? Or maybe he's already back at the motel?”
Elizabeth mulled this over, and nodded, spinning the wheel to turn the truck around.
“Let's hope you're right...”
﻿
Follow me on my blog!
Follow me on Twitter!﻿
Posted by Mloring at 10:24 AM