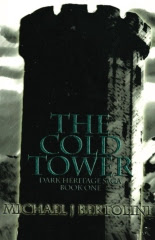 Thinking back, I started writing when I was in sixth-grade. It was my first attempt at writing a book, and I was proud to produce 13 pages. I let a YA author visiting the school read it and she gave me positive feedback; but it was years before I sat down to write anything extensively again. My eventual motivation came when I was a freshman in college, about 6 years later, and I was introduced to the role-playing-game Dungeons and Dragons. The girl running the game asked all the players to write a short background on our characters so that we could play them better to their personalities; she only wanted a few pages and I wrote more than twenty. The match was lit on what would become the passion for writing I have today.

That character history was my first story, expanded into a tale of its own; it was a three sectioned novel that would become The Cold Tower, my first published work. I didn't have a title at the time and in my struggles to find one I edited; realizing that the sections weren't performing how I originally intended but one section had a title I was in love with; The Cold Tower. That book became the start of a saga that I had in my mind, to unfold piece by piece until the final conclusion. But I sat on it for a year. Then, while participating in a yearly writing contest called NaNoWriMo (National Novel Writing Month), I learned about some ways an author can publish their work without having to pray a publishing-house committee approved; and since fantasy is such a small niche I doubted it possible. But with this new insight I found a way to get myself out to the world.

Writing has never been easy; it's a process that requires knowledge of the story and familiarity with the genre. Anyone can try to write, but the best stories keep a person reading until 3 A.M. because they can't stop; and you can't write a fantasy book in the way you'd write a romance or mystery novel. It requires a patience I didn't posses before seriously sitting down in front of the computer, because to get to the parts playing in your mind like a movie you have to get through the boring parts. But if you can do that, you have the potential. I also recommend using spell-check and editing about twenty times.

The only way to get my name out to the public was to market myself, which is a wholly different task than writing. I used word-of-mouth mostly, people tend to trust the suggestions of their friends, and some advertising in my neighborhood. I also managed to have a couple local libraries pick up the first book, so the curious could read and buy the sequels to continue the story. Social media helps, the more people you can connect with then more people will hear about your work. I think that the biggest advertising I've done was give a talk at my Alma Matter, which was also filmed and was broadcast around the state.

Writing can be fun, as it should be; but if you want to do this then you have to act like it's your job; even if you're not making much money from it. With any luck, your work will be validated. The only advice I can really offer is this; write what you'd read, because if you don't like it then nobody else will.

The Dark Heritage Saga books can be found in print at http://www.michael-bertolini.com and in digital format at http://www.smashwords.com
Posted by Emma Michaels at 6:40 AM