Getting to know Tanya Contois

Since this is my first post as a part of this blog I decided to share several random facts about myself as an introduction.

1. One of my favorite things is finding new bands/singers to listen to.

3.I've seen The Punisher about 15 times. I absolutely love that movie.

4.Ever since seeing Stephen King's IT when I was five,I am terrified of clowns.

6.Eating anything that is very spicy makes my ears hurt.

7. I'm unable to cut onions (even though I love eating them) because when I do they make me not able to see anything at all for a good 10 minutes.

8. I hold things inside too much and I have a tendency to just let it build up until I explode.

9.I love any movie with Molly Ringwald or John Cusack.I have probably seen every movie they have ever been in.

10. I have a habit of listening to the same song for hours at a time.

11. I am one of the most indecisive people you'll ever meet.I'm one of those people who will walk around the grocery store for a good half an hour before deciding on one thing.

12. My favorite magazines to read are Cosmo and Alternative Press.

15. I love classic rock.One of my favorite songs to listen to is Free Bird by Lynrd Skynrd.

16. I would give anything to live in New York City.I visited there once for about four hours and fell in love with it.

17. The thing I'm most afraid of is not finding one person to spend my life with.

18.I cry every year on my birthday.

19. Halloween is my favorite holiday.

20. I have the biggest family out of anyone I know.I have relatives that I've never even met.

21. I hate watching the news.It makes me so depressed.

23. I think Valentine's Day is the worst holiday ever because if you aren't in a relationship the day basically sucks.

24.I can't stand being asked why I don't have a picture.I don't own a camera or a scanner which is absolutely fine with me.

25. I believe my mother is the strongest person I know because she had to raise three children alone after losing my father when he was 31.I hope to be as strong as her someday.

Jocelyn has just turned 18 but instead of having the big celebration she was looking forward to for so long she finds out that not only is she not fully human but the people who raised her aren’t her real parents. Instead of staying to listen to her parents’ explanation she takes off and ends up going to live with her biological parents Jacoby and Adeline. Jocelyn quickly makes new friends and gains a potential boyfriend named Sonny but things are far from safe when Kane, another cambion makes his presence known. Now Jocelyn is left with many questions but few answers. What does the future hold for her and will she end up with Sonny? Only time will tell. 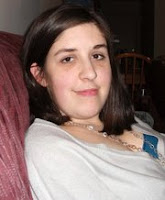 Tanya Contois was born in Worcester, Massachusetts. After living in a few different small towns she moved back to Worcester in 2008. In 2010 she created the Facebook page All Things Books http://www.facebook.com and the blog All Things Books http://speedyreader-allthingsbooks.blogspot.com. Tanya Contois got her first taste of success when a short story she wrote was chosen to be in an anthology to be published by Firefly and Wisp publishers. In October 2011 she signed with Trestle Press and is currently working on Wicked Little Lies and a full length novel titled Cloaked in Darkness.
Posted by Bookish Fangirl at 3:23 AM