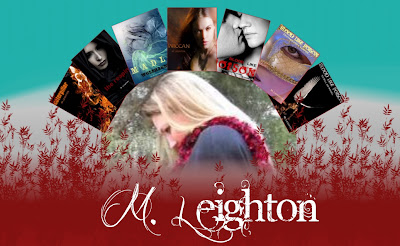 Give a warm welcome to our guest author M. Leighton who graciously agreed to an interview!
Have you ever gotten an idea for a book or part of one of your novels from something or somewhere unexpected?
This is gonna sound completely deranged, but I get a large portion of my plot ideas while in the shower:) I know that sounds crazy, but showering is such a mindless, repetitive task, I relax and let my mind wander where it will. I keep a pen and paper in the bathroom so that when inspiration strikes I can hop out, sling water everywhere, freeze to death, but still manage to get my ideas on paper before they swirl down the drain with the water.
Did you always know you would write a novel? Why did you finally decide to write one and when?
I never once considered being a writer until the day I finished the Twilight Saga. I had just left my job and was taking a short break to take a step back and have a good look at my life, at my career. During that time, I discovered Twilight. I became so attached to those characters, I felt as though all my best friends had moved away when it ended. I told my husband that I would just have to write my own story and make up all new friends. I knew by doing that, it wouldn’t have to end until I said so. I think we both thought I was joking until an idea came to me for a plot.
It was about vampires, but otherwise shared absolutely nothing with Twilight. I woke up early the next morning and turned on the computer. As soon as I typed those first few words, I was hooked! It just started to flow. I emoted for several hours, to the tune of about 5,000 words. By that point, I was obsessed! I typed on and off throughout the day and far into the night. Exactly fourteen days after I’d typed that first word, I typed the last of a 105,000-word manuscript. That was the turning point for me. Although I did go back to work after that, the urge to write full time never left me. That was in late June of 2009.
At the end of November 2010, I quit my job to dedicate myself to becoming a writer and I made my first publication to Amazon on January 31, 2011. Since then, I’ve never looked back and don’t ever plan to.
What are five things that are must haves when you are writing?
1. Absolute quiet (better to hear the voices in my head:)
2. A desktop computer (no laptops or tablets to do serious writing)
3. A window (preferably two)
4. A stack of Post-It notes (I jot ideas, phrases, feelings, songs, likenesses, anything and everything)
5. Colored pens (that’s how I keep everything as separated on paper as it is in my head)
Is there one book that has had an impact on not only your writing, but on you personally?
Probably Twilight for the reasons stated above. It was the impetus to get me started writing. Otherwise, I’d have to say it would be the old-school romance authors like Johanna Lindsey, Kathleen Woodiwiss, and Nora Roberts. Those ladies KNOW ROMANCE!
What is the hardest emotion for you to convey?
I’ve never really thought about it, but probably frustration. I think it’s the most difficult to put into words, the most difficult to express in visceral terms.
Tell us something most people don’t know about you!
When I was younger, I swore I’d never get married. HA! Those are the kinds of jagged little pills one should keep to oneself so that you don’t have to swallow them down with a big helping of crow later;)
Which came first for you--the characters, the idea for the setting, or the plot?
Each book has been unique in that way, but with each of them, they have ended up being far different than the plot/character/setting of my original ideas. With Caterpillar, the idea of living nine lives was what got me started and that’s about the only thing that I kept throughout the evolution of the story. With The Reaping, only the twins and the house with no windows stayed the same. With Wiccan, it wasn’t supposed to be paranormal AT ALL, but witchcraft wormed its way in there anyway, much to my chagrin. Blood Like Poison started out being about a serial killer, but the focus completely shifted as I met Bo and Ridley. And with Madly, mermaids weren’t even a thought in my original ideas.
My stories write themselves. I plant a tiny seed and then as it grows and the characters are born, they dictate the rest to me. I simply transcribe it. My books are as much an adventure and a revelation to me as they are to my readers and I wouldn’t have it any other way:)
Thank you so much M. Leighton for joining us and I hope that you wonderful readers out there enjoyed the interview as much as I did!
Posted by Emma Michaels at 3:13 AM