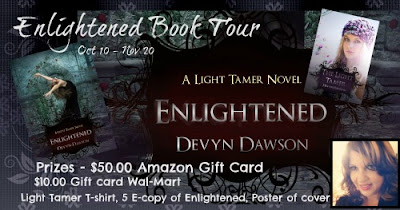 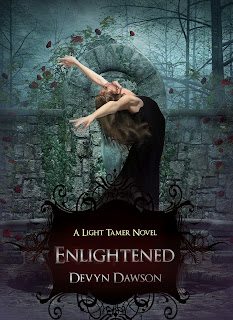 It's my book-birthday!  My new book Enlightened is out today.  Enlightened is the second book in The Light Tamer Trilogy.  This book promises to answer questions that were left open in the last book.  I've kept the secret for so long, I feel like I'll burst.  I hope you take the time to stop by the blogs on the tour.  I'm giving away a $50.00 gift card to Amazon, $10 card to Wal-Mart, T-Shirt, 5 e-copies of Enlightend, poster of the cover..

By the way - our very own Emma Michaels made the cover.

Jessie Lucente, a Light Tamer, has started her junior year at Parca Academy in New Bern, NC. She has a new boyfriend, Caleb Baldwin. He is beyond good looking, he is her mate for life. They've been bound by the light and will rule and heal with it too. Her new classes aren't what she expected. Finding out the school is filled with 'gifted' kids is almost too much to comprehend. She finds out what it means to be a Light Tamer. The assumptions she had are debunked and now everything is crystal clear...well, clear as mud. Now she is enlightened with the facts, she struggles with the truth.
Thorne Woodson, the new kid, has the girls swooning at school. His Doc Martens and hoodie stand out against his school uniform. He might be the guy to heal Amber's broken, grieving heart. What's his story, and why does he appear everywhere Jessie is? He has a secret that will change the game for everyone. Who is he in cahoots with?
Amber starts her junior year with a bang and a huge crush. She has a point to prove on the first day of school. She refuses to let everyone believe she went soft over summer break. Her shenanigans end with detention on the first day. The anniversary of her brother's death has her making dumb decisions but her friends have her back. Jessie will struggle to help Amber deal with the grief.
The secrets  have been revealed by Fate will leave Jessie in a new role. It will come down to bloodline versus logic. She must step up and embrace her new title, and life on the other side of the shimmer. With her small army together, they promise to vanquish Nyx back to the Underworld and seal the portal she came through.
The second book in The Light Tamer trilogy will answer the questions that are burning in your head. A beautiful tale of first love and friendship. Be prepared to be amazed at the twist in this story. You didn't see it coming, but you'll be glad it did!

a Rafflecopter giveaway
Posted by Devyn at 12:00 AM