It's been a BUSY summer for me, with two new releases out in two months. My latest YA contemporary romance, The Rules of You and Me, was released in mid-June. Now this week, I've released the last book of my YA paranormal series Swans Landing, which is about a group of mermaid-like beings called finfolk and takes place along the Outer Banks of North Carolina. 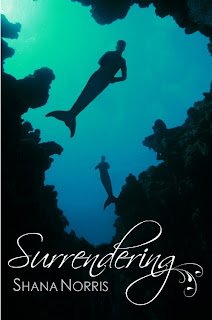 Josh Canavan swam an entire ocean in search of the truth about what happened the night his father died. Now he’s made the journey back in order to save the people and the island he loves.
But when the devastating truth about his father’s death is revealed, can Josh trust who he is long enough to fight the threat that will destroy Swans Landing as he knows it?
Surrendering is the conclusion to the Swans Landing series by Shana Norris.


This book had its moments of being a problem child, but I really enjoyed writing it and bringing all the story lines from the other three books together. (If you’re confused about why this one is #3 when there are three other books before it, it’s because Shifting is a novella rather than a full novel, so I labeled it #2.5.) Finally, Josh finds out what really happened the night his dad died. We learn exactly why Domnall is so interested in Swans Landing. And we learn some other secrets that I hope will surprise you!

If you haven't read the Swans Landing series yet, you can find out more information about it on my website!