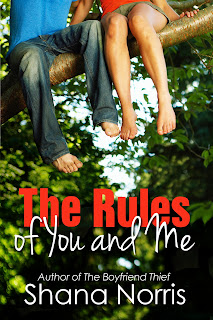 The Rules of You and Me by Shana Norris

Hannah Cohen has always lived her life by a set of carefully constructed rules to maintain the image of perfection. But now, the rules aren’t helping control the chaos that is quickly taking over.

Opting out of spending the summer in Paris with her mom, Hannah instead heads to the mountains of North Carolina to stay with her aunt. The Blue Ridge Mountains provide a barrier between Hannah and the rest of the world, a safe haven where her secrets can be forgotten.

When Hannah crosses paths with Jude Westmore, a guy who hangs a different shirt from the tree in his front yard every day, she finds herself breaking out of the comfort of her rules and doing things she had never dared before. As the summer passes, Hannah and Jude grow closer and make up their own rules for dealing with life.

But when the secret Hannah has tried to forget is finally revealed, even the new rules can’t save her from possibly losing everything–including Jude.

You can read Chapter 1 over here!
Posted by Shana at 5:07 AM