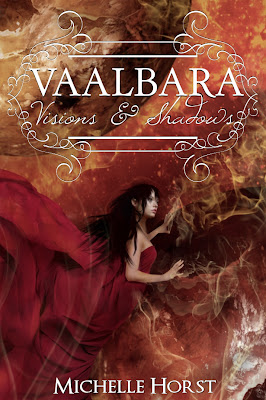 Give a warm welcome to our amazing
guest author of the day
Michelle Horst!


What would you like for readers to take away from your novel/novels?

I wrote Vaalbara Visions and Shadows for various reasons and as the book unfolded beneath my fingers it became quite clear that the main reason were to show that no matter what one went through in life, you should always have hope.

The main character, Alchera, grows throughout the book and shows that even though you battle the darkest of shadows, your humanity should always remain a part of you.

People have lost that and we are destroying the most precious treasure we have – our Earth. That saddens me daily. I wrote Vaalbara to show what can happen and one girl’s struggle to not lose herself through it all.
Maybe Alchera has a little of us all in her.

The Beginning!!! Oh, I must’ve written it a hundred times. The first chapter I wrote originally actually no longer appears in Vaalbara at all and truth be told – I’m still not happy with the first three chapters lol.

When I published Vaalbara I happened upon a group of readers. Dana, Eva, Conny, Nataly, Sandra, Robyn and Jarlyn. These girls and their support made me realize how writing is more than just putting a story on paper; it is sharing a piece of your heart with others. They have helped me grow in so many ways and it is because of them we are actually celebrating a new cover.

And – a big and, through my writing I have met another group of four people, Shelly, Daniel, AT and Wolf. The five of us have had the privilege to start our own publishing company now.
Being an Author has opened a door to a world of fantasy I never knew existed and I will never be able to close that door… Twisted Core Press, Vaalbara and my Ian Somerhalder Foundation girls – they have all become too much a part of my daily life.

What makes you feel like you’re reading or have read a truly amazing book?

When I start the book and the word ‘Oh’ forms on my lips. Hours later I’ll still be in the same position when I close the book. It’s rare when it happens. Conundrum by Amy Lignor (to be released soon), Willow by Julia Hoban, Speak by Laurie Halse Anderson, The Stand by Stephen King to mention a few.

I can name a few books but only one person. If it wasn’t for Amy Lignor, Vaalbara Visions and Shadows wouldn’t be. She has been my rock and pillar since the very beginning. Having her as an Editor is like having an angel and muse at the same time. Everything I know about writing I owe to Amy.

Secrets time! As I’ve mentioned I am privileged to be a part of an awesome team of five talented members who have just started up Twisted Core Press. Vaalbara will be released with a new look through them this coming winter. Keep a close eye out, because Vaalbara won’t be the only title release. Our site can be visited at http://www.twistedcorepress.com/index.html

Thank you for the Q&A Emma!

Thank you for stopping by The Writers Voice!
It has been an absolute pleasure to have you!