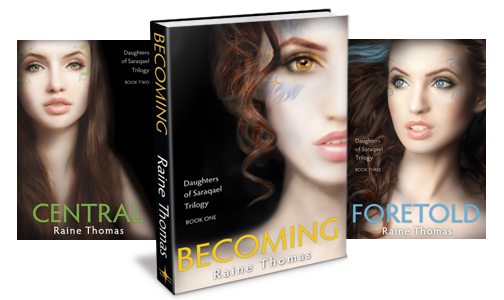 The big news is out: Raine Thomas’ bestselling YA fantasy romance trilogy, The Daughters of Saraqael, has been optioned by Back Fence Productions to be made into movies! Heading the project is multiple award-winning writer and producer, Chase Chenowith, whose film credits include working with Anthony Hopkins, Naomi Watts, Alec Baldwin, Dan Ackroyd, Christopher Walken, Brenda Blethyn, Alfred Molina and James Denton, among others. His films have won 11 Best Picture Awards and 29 total awards.

The books follow eighteen-year-old sisters, Amber, Olivia, and Skye, as they discover the truth about their origins and fight to save a race of beings they never knew existed. Filled with action, adventure, love and intrigue, the stories will translate wonderfully to the big screen. 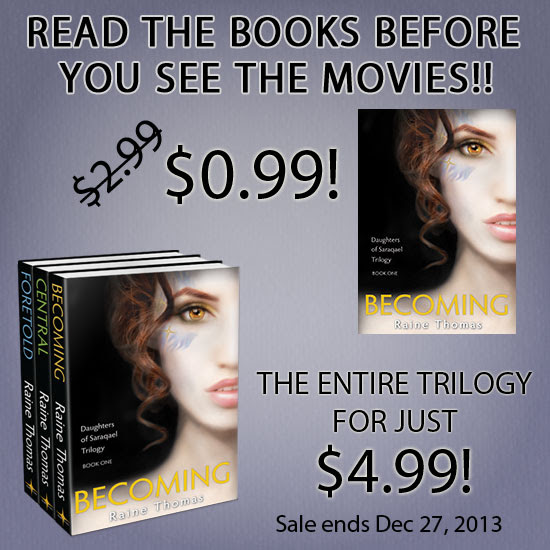 To celebrate the big news, Raine is having a sale and hosting a giveaway! Here’s what you could win:

That’s right! There will be a seventh book in the Estilorian series coming out in 2014, so now’s the time to get caught up on these popular stories. To get you started, Raine is offering the first book in the series, Becoming , for just 99 cents until 12/27. Or you can pick up the entire trilogy for just $4.99 during that time, a two-dollar savings!

ENTER THE GIVEAWAY
a Rafflecopter giveaway